Think about the impact Babe Ruth had on the game of baseball. He saved the sport with his record-setting home runs during a time where people weren't coming to the ballpark in the 1920's due to the Black Sox Scandal of 1919. In 1961, his record for the most home runs in a single season for 60 was chased by two Yankees in 1961, and eventually captured by Roger Maris with 61. But the one record many recall being one of the most iconic records to chase was his 714 career home runs, a mark that stood in tact for 39 years until the guy from Mobile, Alabama faced off serious racial tension and death threats to overcome one of the greatest milestones in baseball history.

Hank Aaron's record of 755 homeruns stood up for 33 years, that was until Barry Bonds smacked his 756th career home run in the 2007 season. But, because of Barry Bonds' Performance Enhancing Drug (PEDs) ties, many still view Aaron as the true home run king of baseball.

Aaron also won the 1957 National League MVP Award and finished in the Top 5 for the award another seven other times. Hank was also voted to the MLB All-Star Game 21 straight times from 1955 until 1975. In fact, Aaron was so good of a hitter, he never struck out 100 times in a single season, as his highest strikeout total was 97 and only reached 90 strikeouts or more only three times.

In July of 2015, at the All-Star Game, Hank Aaron was named as one of the four greatest living players along with Johnny Bench, Willie Mays and Sandy Koufax. Aaron was an obvious choice and to this day, almost 40 years after playing his last game with the Milwaukee Brewers, Aaron's legacy in baseball still lives on.

For card collectors, it's Aaron's legacy and what he meant to the sport that makes him a very sought after player, especially his 1954 Topps rookie card. 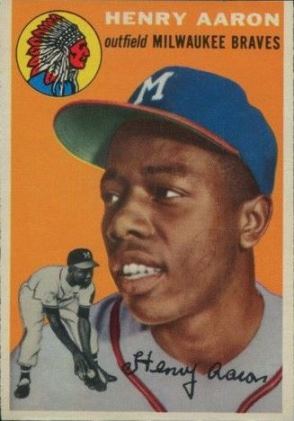 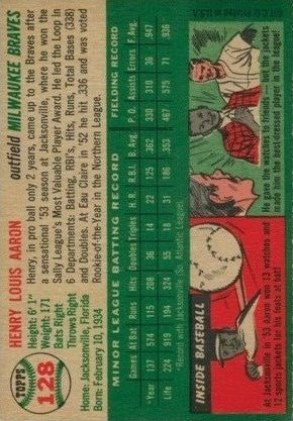 Every single one of Hank Aaron's baseball cards are a draw to collectors, but why this one particular card, especially one in pristine condition with a well-centered image of Hammerin' Hank? If you look around, Aaron's rookie card from Topps in 1954 is in fact the one and only rookie card that was ever printed and put into existence (as opposed to Mickey Mantle, Willie Mays or Babe Ruth, who arguably have two). That alone makes it a draw and a must have for collectors, fans, and anyone who really likes baseball and baseball cards. Finding a high-graded example of his rookie card is almost impossible to do, due to the obvious fact the card has been collected, traded, passed down, and played with (topsies, leaners, put in bike spokes, etc), by youngsters for over 60 years. That alone will ruin the condition of the card.

Something that is not so obvious, is that the printing process of baseball cards back in the day was not the greatest. So, even if you picked up a card straight from a pack, it could have printing defects, like roller marks, print dots, centering issues, and even miscuts. If that wasn't enough, the card could have picked up staining or wax from the packs themselves. Cards from the 1954 Topps set were also larger than most produced by Topps, measuring in at 2-5/8" by 3-3/4", not the standard 2-1/2" by 3-1/2" - so they always "stood out" causing them to be susceptible to wear. So, when you put all those circumstances together, you can see why it's extremely hard to come across a Mint example. In fact, out of the 3600 or so Hank Aaron rookie cards that have been graded by PSA, only 23 examples (less than 1 percent) have been deemed Mint or better, with only two reaching the PSA 10 Gem Mint threshold.

What has caused such a spike and increase in wanting Aaron's rookie card? Appreciation for a great player, rarity of high-graded examples, and the investment factor. The vintage rookie card market is at an all-time high right now, with no slowing down in sight.

During his 23 years in baseball, Aaron had 255 different cards produced, with about 100 coming from the Topps Company. But the one that seems to be the one everyone wants to get their hands on is still the very first one to ever enter circulation - and years down the road, it will only increase in value as it has over the last couple of years, so if you as a collector have a chance to land this card in an auction (and not have it cost you a small down payment of a car), it's the right move to make.

Do you have a Hank Aaron rookie card to sell? We'd love to hear from you. Just Collect is the Nation's top buyer of sports cards, and we're paying top dollar for vintage rookie cards in any condition! Contact us today to speak with one of our specialists to find out what your card is worth, and to see what we're paying for it.