His Super Bowl III guarantee cemented his place in sports lore and earned him a die-hard group of fans, that to this day, bid ferociously on his memorabilia each time it comes up for auction. Whether it's game used jerseys, game balls, autographed items, or vintage photos, if it can be traced back to "Broadway" then be prepared to pay a premium. Namath cards are no exception either, in fact they seem to be the hottest segment of the market right now. Just last year, his 1965 Topps #122 rookie card, graded PSA 9, set a new record when it sold privately (through MINT State) for $60,000.

Due to its size and eye-catching style, the 1965 Topps set is one of the most popular vintage football releases and much of that can be attributed to the Joe Namath rookie card. At 2 ½" x 4 11/16", general wear has always been an issue with these cards as has problems with centering. His cards have fallen prey to these imperfections over the years, and combine that fact with several short prints, and it becomes more clear as to how such a record could be set.

There have been over a thousand Namath rookie cards submitted to PSA, and none have earned the distinction of being called Gem Mint. The highest graded example is Mint, and there have only been four of those encapsulated. A more commonly found condition, EX/MT, is worth between $1600-$1800, and a few of those examples hit the auction block every year. Namath's rookie card, which is arguably the greatest football card ever produced, continues to grow in popularity and value each passing year.

It's also worth mentioning that there is a "butterfly" variation of this card, which is even more scarce than the base #122. On it, there appears an ink spot on Namath's left hand in the shape of a butterfly. However, PSA does not recognize this as an official variation, and it does not carry much of a premium over the regular rookie card. 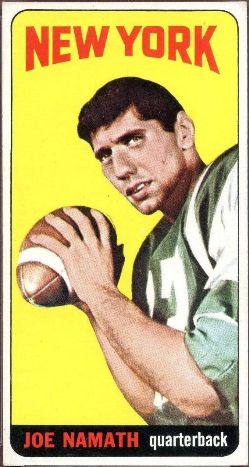 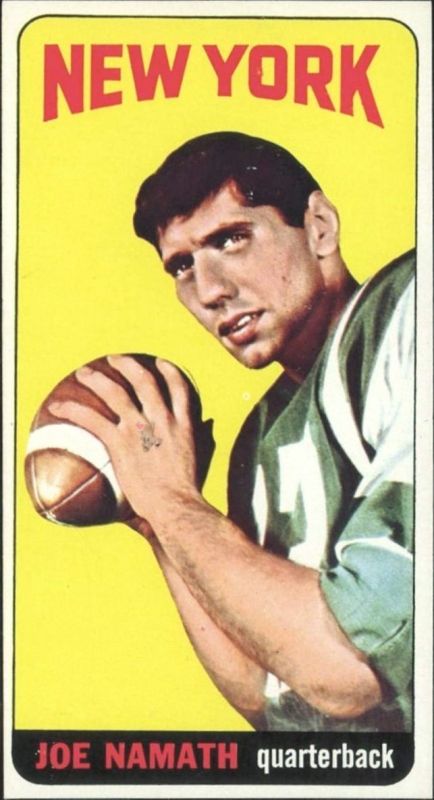 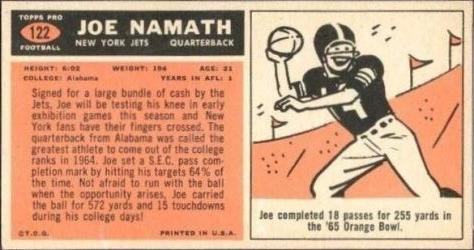 With only a shallow pool of rookie talent to contend with in '66, Namath's second year specimen makes a big splash once again on a card perfectly designed for a player fit for prime time. The one drawback being the faux-wood borders, which combined with the card's inferior stock, make blemishes and wear very noticeable. Centering is another issue, making high grade examples very hard to come by. There have been over 750 examples submitted to PSA for grading so far, and only 10 have come back as Mint or better. The only PSA 10 Gem Mint example sold back in 2010 for almost $15,000. A PSA 9 Mint example is worth between $1800-$2000, whereas a mid-grade example will only run you about $100. Still though, Namath's 1966 Topps card is a unique and affordable alternative to his rookie, and it offers tons of vintage appeal. 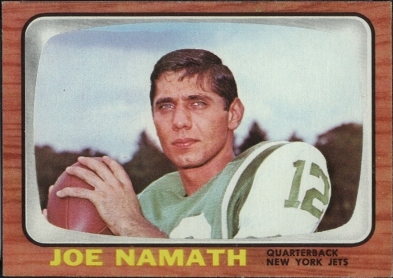 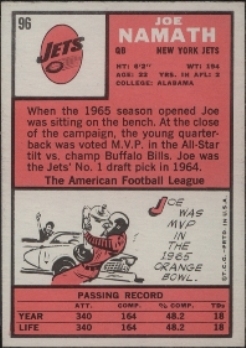 Surrounded in vibrant blues, bold reds, and golden yellows, Joe's third-year offering is one of the few bright spots in the entire 1967 Topps set. Its classic layout and outstanding photo make it a card that's always in demand, and unlike its predecessors, it can be found fairly regularly in better condition. There are actually 42 examples of this card that have been graded by PSA as Mint or better. Examples in Mint condition are worth around six hundred bucks, and the last Gem Mint example that sold went for $4500 back in 2013. A mid-grade example is worth $50-$75. 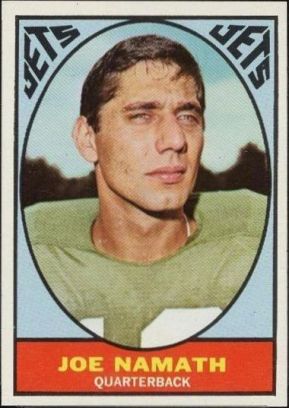 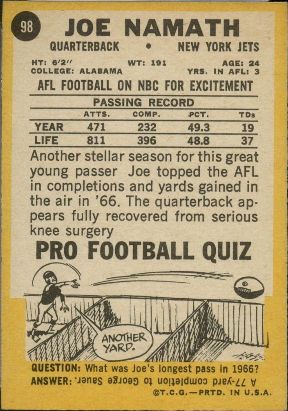 Joe's apparent "blue period" continued on for another year in the Topps set that brought the AFL and NFL back together again for the first time in nearly a decade. This exceptional group of players included a healthy number of Hall of Famers, including Joe Namath, Bart Starr, Johnny Unitas, Gale Sayers, and Dick Butkus; as well as star rookies like Bob Greise & Floyd Little. Still though Namath stood out amongst the bunch and his card, though often found off-centered, remains popular in the vintage community.

Pop colors and a true "mod" look capture the era perfectly and make this one of the most memorable Namath cards of all. It helps that only a few short months earlier Joe led his Jets to a stunning victory in Super Bowl III so fans and collectors alike have always like to have a souvenir from that unforgettable season. Predictably, the full bleed allows wear to be seen quite easily but that's a small trade-off for such an outstanding specimen.

Six years into his career we finally get a card featuring the Joe we all know and love... the wild haired, mutton-chopped gunslinger. Once again though, we get a card that is framed by blazing red borders that highlight every possible flaw, that is part of a set plagued by centering issues and rough cuts. Obviously this has created a shortage of high grade specimens and that's being reflected in the market as prices have soared. As recently as February a PSA 9 sold for over $7K. 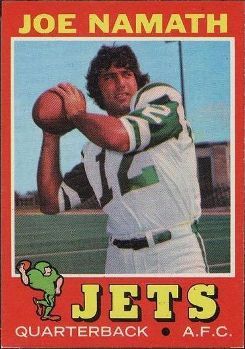 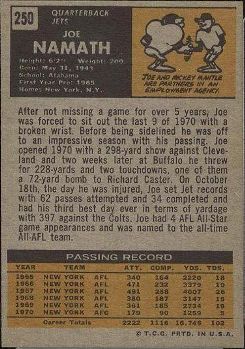 Not to ignore Namath's niche in the modern market, his Legends Autographs card, while less than twenty years-old, has proven no less elusive than its vintage counterparts. It features a blue sharpie autograph written over a great full-length photo of the Hall of Famer and is part of the earliest wave of the signed cards made available to the market by manufacturers. It's limited number and inclusion in the popular set are just a few of the reasons a specimen graded 8.5 by PSA sold for $1700 earlier this year.

Looking to buy or sell some vintage Broadway? Give us a call today and speak to one of our experts. Appointments are available at any of our offices nationwide and personal visits can be arranged if a collection is to large or valuable to be transported by third party.