Since the issue of the National Chicle Football Set in 1935, 13 years and a World War had passed with nary a mainstream football card to hit the candy store shelves. In 1948, Leaf Gum Company improved on what Bowman had done for baseball in the summer of and raised the bar by affording collectors a piece of chewing gum and an assortment of All-Star Football cards. Leaf’s football entry was something a little more special than the black and white fare that Bowman had debuted a few months earlier with their baseball issue and would repeat with their 108 card football issue. The Leaf cards featured color overlays on black and white player images. The simple 3-color process added red, yellow and blue to the uniforms and backgrounds of the cards. Although not exactly high tech by today’s standards, the 1948 Leaf offering has had a resounding impact on many of today’s vintage collectors. Measuring a smallish 2 3/8" by 2 7/8," the 1948 Leaf Football cards showcase colorized pictures, with only the flesh portion of the player remaining in black and white. Card backs exhibit personal and biographical information on either a cream-colored or grey stock background.

The 1948 Leaf Football Set was issued in two different series of 49 cards (1-49 and 50-98). The first series included many of the game’s best professional players including Sammy Baugh, Sid Luckman and Steve Van Buren. The second series was much more limited and includes mostly collegiate players and some of the toughest cards in the set to find in top condition. A few of the notable players included in the second or high number series include Chuck Bednarik, Charley Conerly and Leo Nomellini.

All-in-all, out of the 98 cards in the complete set, there are an astounding total of 15 Professional Football Hall of Fame rookie cards. The total of 15 is likely to increase with the potential of several others eventually gaining induction into the Hall. Both Philadelphia Eagles perennial All-Star tackle Al Wistert and New York Giants quarterback and former Marlboro Man Charley Conerly are worthy candidates that will have to await Senior Committee selection.

Leaf Football isn’t a slouch when it comes to realized prices, either. A 1948 Leaf #1 Sid Luckman rookie graded PSA 8 sold in a Goodwin & Company auction in 2009 for $71,836. A PSA 8 Chuck Bednarik sold for $38,561 in 2007 and would probably sell in excess of $50,000 if offered today. These examples highlight the value collectors place on high condition examples from this great set. 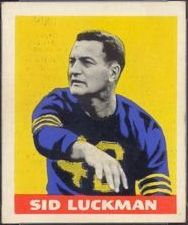 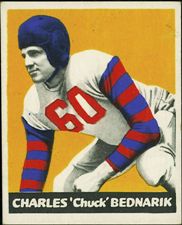 There are quite a few variations throughout the 1948 Leaf football, most the result of the printing process. Given that the base set is 98 cards, there is a master set that, depending upon the extreme one cares to take the inking, naming and spelling variation, the Master Set could easily excess 130 cards. In addition to the “normal” variations, the cards come with cream and grey colored backs. The grey stock is much tougher to find in the low number cards and is the same stock used for the baseball issue.

Some of the non-inking or color variations include Johnny Lujack with his first name incorrectly spelled "Jonny," which was corrected and spelled “Johnny.” Pat Harder’s last name was spelled "Harber" and was not corrected just as Jackie Jensen’s first name was printed as "Jackey" and was left spelled erroneously. Also, Leaf used both George McAfee’s name as well as his nickname "Gorgeous" on the scarcer of the two McAfee variations.

There is also a multitude of inking variations in the set. Some of the variations have been noted in price guides, online checklists and by third party graders. The variations range from the subtle to the extreme and from real to over exaggerated. Combinations or oversaturation of the basic red, blue and yellow will create tones that appear green, grey, maroon and orange. Uniforms (both pants and jerseys) can be found with varying color combinations. Typically, red and yellow may be represented with variations that are better described as maroon or green when combined with blue. In addition, many anomalies exist in the numbers on the uniform jersey. Pete Pihos and Tommy Thompson have yellow jersey numbers on the standard issue, but there are blue number variations.

There are also some variations with the color of footballs, jerseys and helmets that are a little more dramatic than some of the slight shading variations. Harry Gilmer comes with three distinct football color variations. One is the black football, one is a yellow football and the final is a dark brown football and Gilmer’s jersey is either red or purple (maroon). Paul Governali has a helmet that ranges from blue to tan to dark brown. Al Wistert has a jersey that can be found in yellow, but also, there is a scarcer green version.

After getting past the variations and scarcity of the high number series, some of the condition problems that plague the issue are that the softer, cream colored stock was easily worn and damaged making even excellent or better examples very difficult to find. The #1 Sid Luckman card is not the easiest to find well centered all around. In the high number series, the first and last seven cards (#50-56 and #92-98) are very tough to find centered. The most notable of the off-center cards is Chuck Bednarik. A Hall of Famer and one of the greatest players ever, Bednarik is often found centered so far to side that the opposite border is missing or barely visible. The centering issue that plagues the Bednarik also hinders other cards in this set making these cards extremely difficult to find in top grade. One such example is #56 Bob Folsum that has never been graded any higher than EX/MT!

Many collectors have added parallel or companion pieces to their collections over the years. Some will collect salesmen samples, company samples, order forms, packaging boxes and wrappers and even unopened product when available. The 1948 Leaf Football issue presents a formidable challenge on most of these fronts. With very limited availability of original wax wrappers and only 2 known display boxes, an unopened wax pack has, to the best of our knowledge, not been identified or offered in the hobby over the past few decades. We would love to see an unopened wax pack if one even exists!!!

With the renewed interest and increased demand for quality vintage football cards and Hall of Fame rookie cards, 1948 Leaf cards have become a rather hot item in recent auction circles. Being a hot commodity, they’ve also become a target for card doctors. For the past several years, collectors have had to be wary of trimmed cards that have been finding their way into third party grading holders. These are more obvious to spot when one understands the typical width of the borders (having an unaltered card in your collection is always a great resource). The eye appeal of the full borders and being familiar with how the cards present with a full border will aid in identifying cards that have been trimmed and turned into 1948 Leaf “minis.” Be very cautious when buying or trading for any cards from this issue that appear to have unusually narrow borders.

Just Collect, Inc. is always looking to purchase 1948 Leaf Football cards and other vintage baseball, football, basketball and hockey cards. Our staff of well informed, customer service representatives are ready, willing and able to help you with any sports card questions that you may have. Additionally, Just Collect’s experienced sports card specialists can answer most of your detailed or specific questions. When you finally decide it's time to sell your football cards, give us a call!