The Great Bambino, The Sultan of Swat, The Colossus of Clout, The Big Fellow, Bam. Babe. If greatness was only judged on the number of nicknames a man can garner, George Herman Ruth would still be the king. That not being the case, the kid from Baltimore took to the diamond and crushed his way to the crown, shattering every offensive, and even a few pitching records along the way. Amazingly though, his incredible exploits on the field were only half of what made him the most sought after and highly valued name in the collectors market today.

In an age before Twitter, Instagram, and countless other social media outlets, the Babe wielded his larger than life persona and outrageous lifestyle to cut his mark across headlines almost each and everyday and in doing so became a household name even the likes of which even the Kardashian Clan would envy. The man was bigger than baseball itself and he was the face of the Roaring Twenties.

Is it any wonder then that each time a piece of memorabilia associated with the former Yankee hits the block an immediate bidding war ensues. Long after his passing his bats continue to break records, his caps are heads above the rest, his jerseys are still top news on ESPN, and his vintage cards...oh the cards! His cards are skyrocketing to new levels with each passing month!

And while only a rare few of us will ever have the opportunity to own a piece of Ruth's game used memorabilia, his cards are still accessible to many. Even more encouraging, they're still out there in quantity to be found. Or at least that's what we tell ourselves or else why be involved in the hobby, right?

So, for those of you with us on this exciting hunt, we've complied a list of the best Babe Ruth cards to keep a particularly keen eye out for:

Originally advertised by American Caramel as a "Series of 80", there have been over 120 different player cards recorded to date (along with a number of variations), five of which star Babe Ruth. That group includes two complete head scratchers that have The Bambino holding a bird and standing next to a carton of Camel cigarettes. Don't get me wrong, it's a handsome set highlighted by extremely sharp photo images, but a bird and a box of smokes? Imagine Mike Trout posing for Topps grasping a pigeon with his leg up on a box of Marlboro Reds. It just doesn't compute and just one of those things you have to chalk up to "different era".

Anyways, back to the cards themselves. Aside from the two Babe vs Bird examples the are three other 2" x 3 1/4" pieces that show a full length shot of Ruth in a throwing motion (these cards have his name printed in three separate ways: Babe Ruth, "Babe" Ruth, and George Herman Ruth), a portrait image of Ruth holding a ball in his right hand, a montage card with two overlapping images (full length image with bat resting on shoulder in the foreground and larger portrait image behind). All five cards have a thin black line border around the front image with his name, position, and team printed below. On back is the "National Caramel Company - Lancaster, Penna" along with a very basic of set description. If you're a fan of the obscure, then this is definitely the Ruth card for you!

The key to U.S. Caramel's 1932 32-card multi-sport set this boldly colored beauty displays a colorized black and white bust of the Babe set against a vibrant red background. On the back is a short bio and set description in between borders that measure 2 1/2" x 3". Two factors make this card especially difficult to collect, first being the sets limited distribution around the Boston area, while the second is the fact that it is the final card of the set. Meaning it was usually stored at the bottom of the stack and made vulnerable to all types of harsh friction and even harsher elements. Mid to high-grade examples have held steady in value over the years, while high-graded examples continue to increase in value. Since 2006, three examples of this card have sold in NM/MT condition, with the realized prices having almost doubled in that time. A PSA 10 Gem Mint example has still yet to be found, while only 2 examples have reached the PSA 9 threshold, and have never sold at public auction. 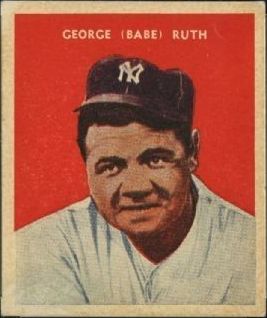 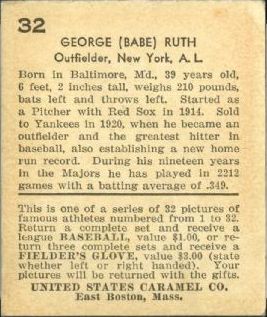 By 1948 the Babe's playing days were long behind him and illness had taken its toll on his mighty frame and massive spirit. He would bid his famous farewell at Yankee Stadium that June and a just two months later he was gone forever which makes his appearance in the 1948 Leaf set, his last in a major card release, a very fitting goodbye. Collectors agree as the demand for this particular piece remains high and who would disagree. His black and white photo image in Yankee pinstripes, set against a contrasting red background, above large block letters as bold as the man himself, spelling "BABE RUTH", sum up the baseball giant perfectly. Issues with centering and print plague all of the 2 3/8 x 2 7/8" pieces on the 96-card set and his is no exception so a high grade example of "9" or "10" could very well fetch six figures. But that's the Bambino...always putting up the big numbers. 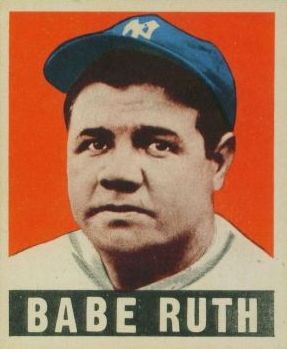 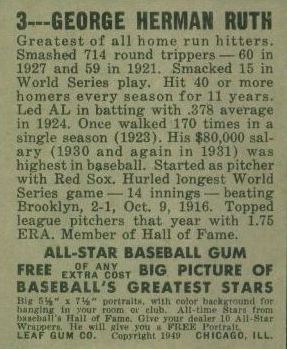 As you can tell, high-grade examples of the 1948 Leaf Ruth are continuing to rise in value, and low-end examples are staying consistent - which is good news for the hobby. Out of the 900 or so examples of this card that have been submitted to PSA, zero examples have graded out as PSA 10 GEM MINT, and only four examples have graded as PSA 9 MINT. The highest graded example to ever sell at public auction is a PSA 8 (NM/MT), which has sold a few times, with the most recent sale being $6,190.10 in 2014.

Have any of these gems yourself? Any vintage Ruth cards at all? Looking to sell? Give us a call today to discuss your options. Appointments are available at our offices nationwide and we are willing to travel directly to you if we deem the collection to large or valuable to transport through a third party.

We look forward to hearing from you!