In 1951, Topps produced a set of game cards featuring a limited roster, absent of most of the game's stars. Topps' inaugural set failed to provide meaningful competition to rival Bowman, whose cards had been a candy store fixture since 1948, and contained all of the era's key players. In response, Topps adopted the 'bigger is better' mentality and released an aggressive set for 1952 they described as 'giant size' - not just for producing large format cards that measured 2 ⅝" by 3 ¾", but also for including an expanded checklist in six series that tallied some 407 cards.

The large format cards had two direct impacts in becoming immediately popular with collectors and outshining Bowman. First, larger cards resulted in larger packs, which in turn resulted in larger boxes. These large boxes took up a lot of real estate on the sales counter and caught the eye of consumers more easily. Secondly, Topps put the added size to good use by utilizing vibrant color photography on the front and placing additional statistics and biographical material on the reverse. The result was not only a more attractive trading card, but a more informative one as well, and it proved a winning combination with collectors.

Topps staggered their 1952 release in six series, which was designed not only to provide consistent sales throughout the year, but also to build anticipation among collectors who awaited the release of their favorite player's card. Cards in series one (#1-80) can be found with either a Black back or Red back. Among the players who would go on to be elected to the Hall of Fame contained within the set include Warren Spahn, Robin Roberts, Enos Slaughter, Bob Feller, Red Schoendienst, Richie Ashburn, Larry Doby, George Kell, Bob Lemon, Early Wynn, and Eddie Mathews.

An emphasis was placed on stars of the New York area following the most memorable pennant race in history, when Giants slugger Bobby Thomson hit the 'shot heard 'round the world' off Dodgers hurler Ralph Branca. The Giants would go on to lose the World Series to the Yankees, but in the process established New York as the capital of 'baseball'. The Yankees are well represented with Hall of Famers Phil Rizzuto, Johnny Mize, Yogi Berra, Bill Dickey, and Mickey Mantle. The Dodgers checklist is loaded with the likes of Jackie Robinson, Roy Campanella, Pee Wee Reese, Billy Herman, and Dick Williams. The Giants are represented with Monte Irvin, Willie Mays, Leo Durocher, and Hoyt Wilhelm. The non-Hall of Fame players of the three teams are widely collected and sell for what has been described as a 'New York premium'.

1952 Topps is the second most collected set in the hobby, with an impressive 184 sets currently being attempted on the PSA Set Registry. As a result of the popularity of set registries, collectors have engaged in fierce competition for higher grade examples causing their value to continually rise. Given the fact that the set is now 62 years old, finding cards that have survived in mint condition can be difficult - as many in 1952 viewed them as 'toys' and an emphasis was not placed on condition. Countless 1952 cards were battered and beaten in bicycle spokes or while being flipped down a wall as part of a popular game that resulted in countless cards changing hands. Still more were simply enjoyed by fans who handled them daily either committing the facts on the reverse to memory, or engaging in trade negotiations on the school playground. Those cards that were fortunate to survive unscathed must also have had to emerge from the factory well centered, free of print marks, and without obtaining wax or gum stains once inserted into the wrapper. All of these factors explain why that of the 185,502 1952 Topps cards submitted to PSA, that only 73 have received a PSA 10 'Gem Mint' grade.

The key card to the 1952 set is card #311, which features the youthful image of New York Yankees centerfielder Mickey Mantle. With Joe DiMaggio's retirement following the 1951 World Series, the Yankees became the young Mantle's team and the spotlight of the nation's largest city fell upon him. Capitalizing on this, Topps released his card as the first card in the sixth series and double printed it to meet the expected demand. Although it is not Mantle's "true" rookie card, the longevity of the Topps brand and the popularity of the 1952 set have made this the most popular card ever produced and the most valuable card of the post-war period.

Card #261 features the card of the player who would challenge Mantle for the title of the game's greatest star in the 1950s and 60s: Willie Mays. In 1951, Willie Mays won the National League Rookie of the Year and led his Giants to the World Series. Although they failed to win, he had established himself as one of the game's bright young stars. The image of young Mays playing stickball in the streets of New York, combined with his 'Say Hey' catchphrase, made him incredibly popular. Although 1952 Topps is also not Mays' "true" rookie card, it is desired by collectors for the same reasons that have driven the value of the Mantle card.

Another card of note in the 1952 set is that of Brooklyn Dodger Andy Pafko. Up until the 1980s, collectors would often keep their cards unprotected and bound together by rubber bands. As a result, the first and last cards in the set would succumb to the pressure of the band and become wrinkled and sometimes heavily creased. Pafko is featured as card #1 in the set, and has become forever linked with the 'condition rarity' associated with vintage sets. In low and collector grade, the Pafko often sells for no different than other Dodger players in the set, but in higher grades a considerable premium is affixed to the card. 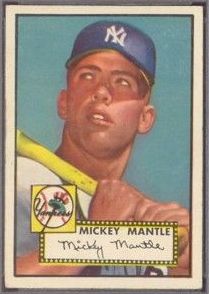 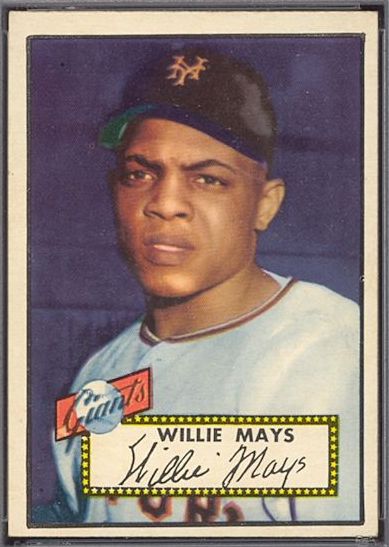 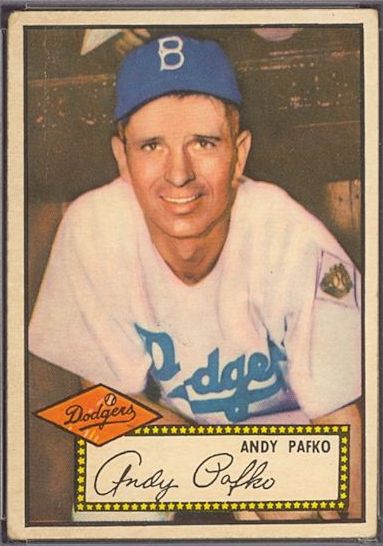 The sixth series, starting with the Mickey Mantle rookie card (#311) and ending with the last card in the set (#407), are considered the 'high numbers'. These cards are more difficult to obtain than cards issued earlier in the year, and as a result they sell for a premium. Many reasons have been given for the shortage, with the most common explanation being that their issue during a time when the baseball season had ended and football was leading the sports pages. It has been widely stated that the unsold sixth series cards were disposed of by Topps - and like most trash from the New York City area - were dumped offshore into the Atlantic Ocean. Regardless of the reason, modern population reports have confirmed the shortage and heightened collector's desire for the cards.

In addition to Mickey Mantle, there are several key cards issued in the high numbers. Among these is card #312 featuring Jackie Robinson, who many consider to be the most important individual to play the game, and card #314 containing Roy Campanella, who would win three MVP awards. Finally, the third most valuable card in the set is that of Hall of Fame third baseman Eddie Mathews, a member of the elite 500 home run club. Mathews is contained on card #407 in the set, which means not only is it a high number, but it is also the last card in the set, and subject to the same condition issues as the aforementioned Pafko card. These three factors combine to place the Mathews card behind only to Mantle in terms of value.

Following the failure of the ill-fated 1951 Topps set, Bowman had no reason to fear Topps or to expect a serious challenge in the card market in 1952. However, Topps produced such a widely acclaimed and popular set that within four years Bowman would be out of business, and Topps would be largely uncontested until the 1980s. This is the set that the baby boomers turned to during the card boom of the 1980s, cementing it's popularity and value with collectors over the decades that followed. The simple, yet memorable design, combined with legendary star power and iconic cards such as Mantle, Mathews, and Mays have made 1952 Topps the most popular set of the post-war era.