He was a outspoken racist yet supported the integration of the game. He was a vicious bully but got along grandly with children. He was a selfish and surly teammate but spent years secretly campaigning for Sam Crowford's, his biggest rival, admission into the Hall of Fame.

With so many contradicting stories about Ty Cobb it's impossible to differentiate fact from fiction and come to a final judgement on the man himself. Which is why some, including myself, have just given up such a thankless endeavor and instead choose to look at him solely as a baseball player. A professional whose sole purpose it was to produce for the franchise that paid him to do just that. Through that lens, and based on hard numbers that allow no emotion in their calculation, there is only one conclusion that can be reached...Ty Cobb was one of the greatest of all time! How great? So great that despite all of the despicable tales of his behavior throughout his career, he received more votes on the inaugural Hall of Fame ballot than any other player. Yes, more than even the beloved Babe Ruth.

Based on recent hammer prices it's clear that today's collectors also value Cobb's performance over his personality as well. It's nearly impossible not to. The man owned ninety (that's right...90...nine-zero) MLB records at the time of his retirement, some of which still stand today, nearly a century later! And among the array of the Peach's collectibles, his vintage cards have experienced a recent spike so sharp that it can only be compared to the one's Ty sharpened himself. So whether you're currently holding some of these precious pieces or are out on that never ending hunt, here's a quick guide to his hottest cards right now:

Although the W600 Sporting Life series began issue in 1902 (1902-1911) it wasn't until 1907 that Ty Cobb made his first appearance on what many consider to be his true "rookie" card. This is by far one of the most exquisite card specimens ever produced as it features a large black and white image of Cobb, taken by noted photographer Carl Horner, mounted to a heavy cardboard frame (5" x 7.5"). And I If the pose looks familiar, it should. It is identical to the one that appears on his popular T206 portrait cards (both red and green backgrounds). 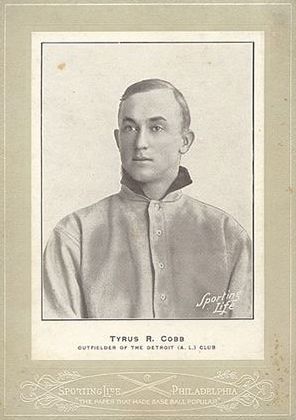 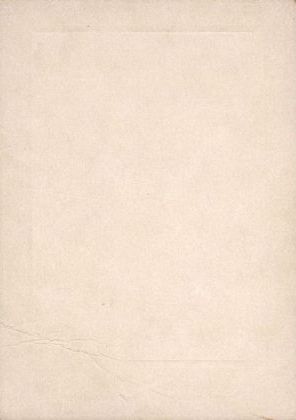 This is by far the most rare card in the entire hobby. More rare than the T206 Honus Wagner. Rarer than Babe Ruth's minor league card from 1914. There are only four known examples of this card, with three of them graded by PSA, and one graded by SGC - with the greatest example being in "VG" condition. To our knowledge, this card (regardless of grade) has only sold publicly FOUR times over the past decade. Let's take a look at the sales history of this card:

Looking for a real challenge? Try collecting each and every one of Cobb's T206 cards. With four different fronts (portrait-green background, portrait-red background, bat off shoulder, bat on shoulder) and thirty-seven different advertiser backs (Piedmont, Sweet Caporal, Sovereign, Old Mill, Polar Bear, Lenox, Hindu, Tolstoi, Cycle and others) it's a task that could take a lifetime. If you're lucky enough though to just find one, hope that it own's a Ty Cobb back. Distributed along with Ty's tobacco products it is considered the most rare with fewer than 20 known to exist.

A fine looking card which boasts a hand tinted black and white image set against a vibrant orange background, Cobb's E93 is the crown jewel of the thirty card set distributed by Standard Caramel. The finest example of this 1 1/2" x 2 3/4" gem, graded PSA 9, sold just this past July (2015) for $81,000.

Cobb again is the main attraction in this, the most delicate and possibly ornate card set of the pre-war era, and rightfully so. At the time of it's release Cobb was experiencing the greatest season of his career setting highs in batting (.420), hits (248), doubles (47), triples (24), RBI (127), runs (147) and slugging average (.621), and stolen bases (83). This 1 7/16" by 2 5/8" nugget is a fitting tribute to a remarkable year but do handle with care. The gold borders are extremely fragile which make high grade examples nearly impossible to find. 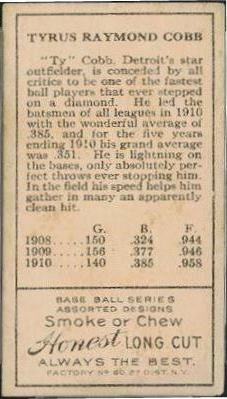 If you like the T206 Bat On Shoulder Cobb than you are going to loooove this next piece. It shares all the same majestic beauty but in oversized 5 3/4" x 8" form. From the brilliant coloring to the strikingly similar steely eyed pose, this T3 Turkey Red is worth each and every one of the cigarette coupons, and cigarettes, it took to redeem over 100 years ago. The backside has two variations, an advert or a checklist, but to date neither has received preference from buyers and therefore price and demand remain equal.

Frankly, it's surprising that Cracker Jack boxes in 1914 and 1915 didn't come with a hazard warning. Just imagine the shock of suddenly finding Ty Cobb, baseball's biggest villain, staring intensely into your soul as he does on this card front while enjoying your favorite snack. Startled, some dry peanuts go down the wrong pipe and before you know it your in the midst of an eye-tearing choking fit!

Glare aside, his 1915 Cracker Jack #30 is again a highlight on the list of all-time Cobb cards. Bright and bold on front, with card number, player bio and company ad on the back, it measures 2 1/4" x 3", and verso aside is identical to it's 1914 counterpart which are more scarce due to the lack of a red prion program that year. Also worth pointing out is the difficulty in finding cards from the 1914 set in respectable condition. Their inclusion solely in the box meant staining and damage was almost inevitable. But if you are a die-hard fan of Cracker Jacks the earlier set undoubtedly held one edge as they all smelled much more delicious. Otherwise, we'd suggest sticking to collecting the 1915's. 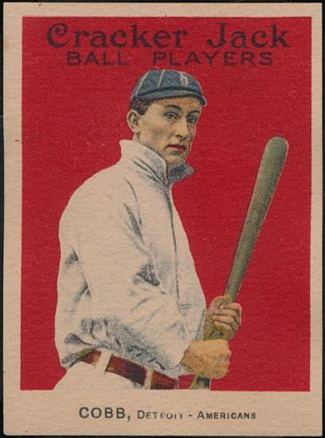 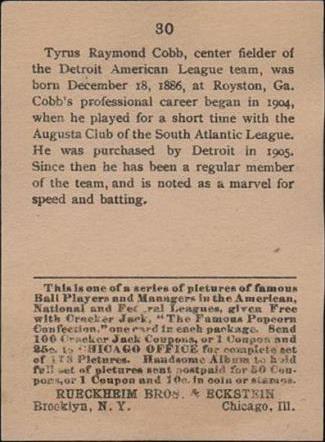 So how bout it? Think you have any of this sweetness stashed away? Ready to cash in your prize? Then our team of experts want to hear from you today. Call us with questions or to arrange an appointment at any of our offices nationwide.