Slaying the Monster: How to Sell T206 Tobacco Cards

The 1909-1911 T206 tobacco card set is the hobby's most revered and iconic series. Many of the Dead Ball Era stars enshrined in this 524 card group still fascinate us a full 100 years since their heyday.

Whether you’re an advanced T206 collector or a novice trying to identify some old cards, there's always something to discover with this challenging and awe-inspiring set.

The T206 set, aka “The Monster,” circulated for three years between 1909 and 1911. Printed at the American Lithographic Company in New York City using a six-color process, the cards were packed inside of cigarette packs issued by the various brands of the American Tobacco Company.

Although they exclusively appeared in tobacco products (cigarette packs and tobacco tins), they were hugely popular with children from that era. Kids collected and traded the unique color pictures of the baseball stars of the day with their friends.

The full list of Hall of Famers in the T206 set is:

Just Collect's Leighton Sheldon was featured on Bloomberg News discussing why the PSA graded T206 Honus Wagner is worth millions. 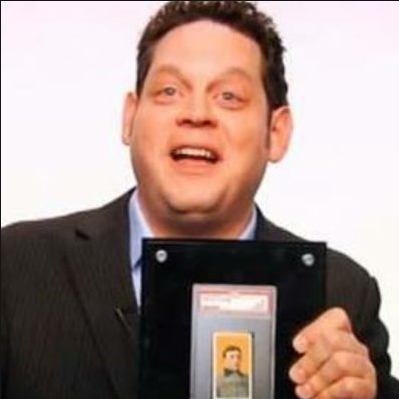 The most famous baseball card in the hobby is the iconic Honus Wagner T206 card. Legend has it that Honus was pulled from the set after he demanded that his likeness not be used to advertise tobacco to children. But Wagner smoked cigars and used chewing tobacco. A new theory suggests that Wagner simply demanded more money for the use of his likeness. 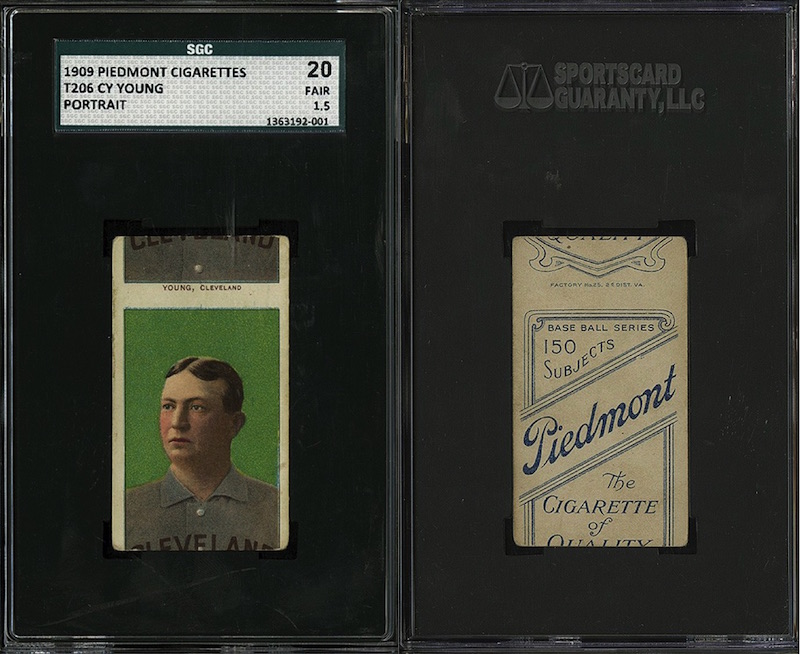 We purchased this amazing T206 Cy Young Portrait miscut from a family in California in 2014.

Collectors love items with factory errors from the printing presses. Off-beat cards like miscuts, blank backs, and color errors are highly coveted. Many of these errors never even made it into packs --- instead they were recovered from the printer directly.

People also collect "ghost" cards, with an image of another player superimposed onto the featured card. Since printing press capabilities were not nearly as sophisticated as today's presses, those errors could almost be expected for the sheer volume of cards created.

A look at the different backs of the T206 set.

The T206 set features 15 or 16 different backs depending on who you ask. The backs advertise cigarette and chewing tobacco brands.They include:

*Many don’t consider the ultra rare Ty Cobb Red Portrait with Ty Cobb back card to be a part of the T206 set.

The two most common backs, by far, are Piedmont and Sweet Caporal. The rarer the back, the more valuable the card. The rare backs are bolded above. 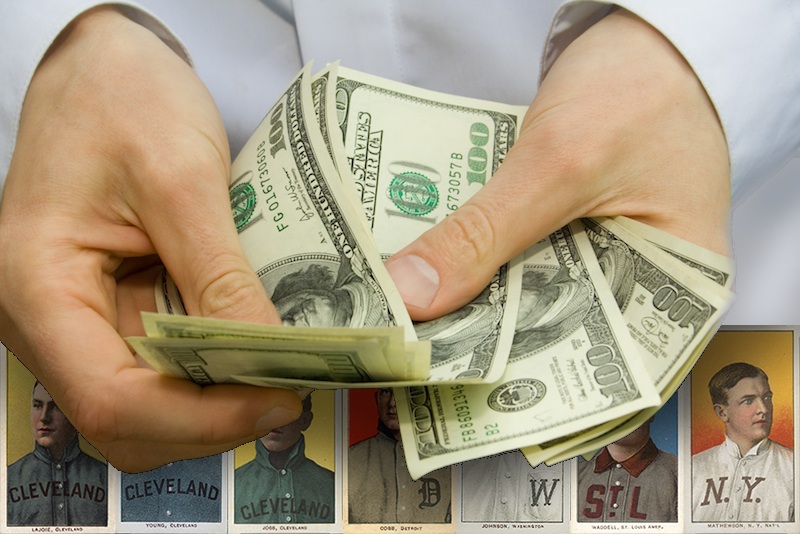 So what do you do if you've got T206s and you're looking to sell?

We can talk all day about the players and the different aspects of this set, but what many people really want to know is, "What's it worth?"

You can visit our page on How to Sell Baseball Cards, but to quickly recap that info:

While lesser-condition T206s are certainly not rare, high demand means there's always a market. T206s command value in any condition --- so don't think that because yours are creased and scuffed and folded that they're worthless. Many collectors allow variance in what they're willing to buy. Always seek the advice of a professional before giving away your cards at bargain basement prices.

Click the image below to get started with our online sports card appraisal form. 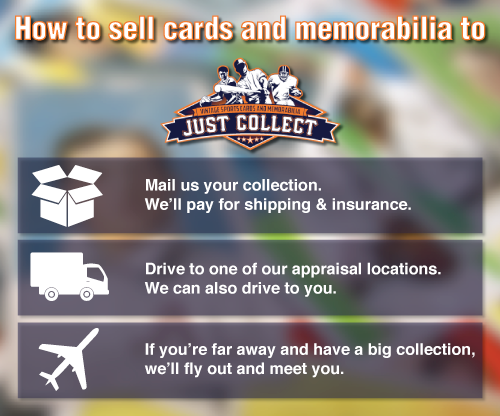 How to tell real from fake?

Authentic T206 cards will display a distinctive irregular dot pattern upon examination. Take a close look at the player's face. If you see an uneven mixture of dots and solid color, that's a good sign. If you see a uniform pattern of dots, it's a reproduction.

Look at the letters printed at the bottom of the player's name and team. The ink should be a dark brown. If it is a solid black, that could mean that the card is not authentic.

There should be no glossiness to the card whatsoever. Many reproductions are printed on a glossier stock.

Due to the relatively primitive printing process compared to today's standards, a fair amount size of variance is permitted within the T206 set. Some cards may be significantly smaller or larger than their normal 3.7 X 6.7cm. Grading companies understand this and will slab pieces that deviate from this range.

Other than the Honus Wagner (mentioned above) there are three other key cards in the set that deserve special recognition.

One of the best pitchers to ever play the game, Eddie Plank was inducted into the Baseball Hall of Fame in 1946. Due to Plank's legacy and the rarity of his T206 card (less than 100 in existence), it's considered the second most valuable card in the hobby. Even in lesser condition the card is worth $20,000-$40,000. Researchers have speculated that perhaps the printing plate used to create the plank cards broke, leading to the scarcity of the card. 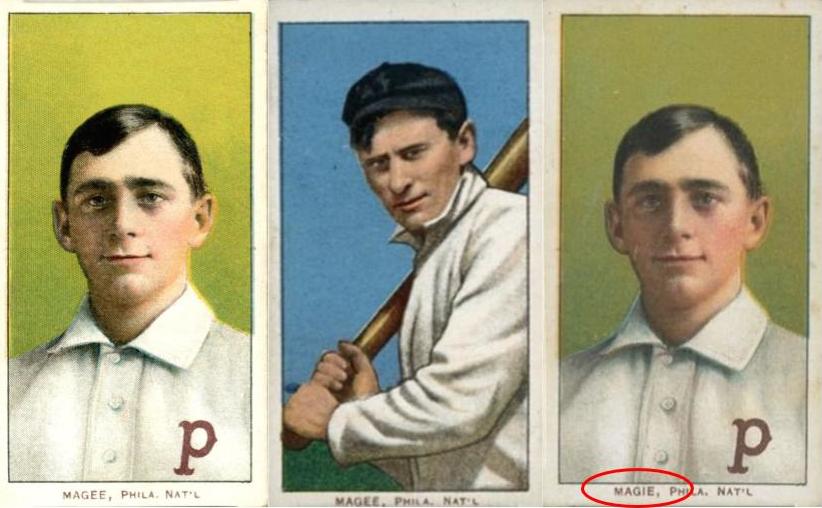 Sherry Magee has three cards within the T206 set, one featuring a portrait shot of him, the second with a bat on his shoulder, and the third is also a portrait shot, but his name is spelled wrong (Magie). The error card was short printed, and now comes at a premium. There are less than 175 examples known to the hobby, and even in low grade, the card is worth between $4,000-$8,000. His other examples from the set, in the same grade, are worth only $30-$50. 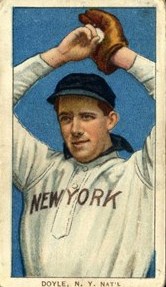 Doyle has two examples (poses) in the T206 set, but one with a "N.Y. Nat'l" designation. The only problem was that Mr. Doyle played for the N.Y. American League team, and was apparently mistaken for Laughing Larry Doyle, a star for the N.Y. (National) Giants. How rare is rare? Well, only 10 or so examples of this error card still exist today. Doyle only had a brief stint in the Big Leagues, and has no real significance to the game in terms of legacy - which is why this ultra rare card is not a million dollar card. Can you imagine if he ended up being a Hall of Famer? How much would this card be worth? Only eight copies have been encapsulated by PSA, with the highest grade being a PSA 6. To our knowledge, this card has only been sold three times.

We’ve had the honor of purchasing several large T206 collections over the years, the most notable being what we’ve dubbed, “The Fairy Godmother Collection.” Passed down to a gentleman by his godmother, the amazing collection featured one of the toughest cards in the hobby, the Eddie Plank.

Other collections we’ve purchased have been glued to poster boards, acquired for next to nothing, or found in old desks. Check out our T206 compilation video below.

Have questions about selling your T206s or other sports cards or memorabilia? Contact us weekdays 8am to 6pm at (732) 828 2261 or at info@justcollect.com

Also check out our free appraisal serivce. We'll tell you what your cards are worth, and what we'll pay for them.