1957 was an incredible year for collectors of Topps cards. Not only did Topps reduce the size of their cards to the modern standard of 2 ½" x 3 ½", but they also changed the dynamic of the imagery and photography that they included in their offerings.

On the heels of the full photo baseball issue of the summer, Topps was gearing up their premier basketball release while providing football fans with a unique offering as the summer months wound down. Topps completed the set with 154 player cards in the 1957 horizontal formatted set. Amazingly, 31 of the players were eventually enshrined in the Pro Football Hall of Fame at Canton, Ohio. Even more incredible is that Topps could've also included Jim Brown and Len Dawson, also eventual Hall of Famers, but opted not to feature them during their actual rookie seasons. Dawson would not appear on a card until 1963 with Fleer and not on a Topps card until 1964.

Topps still struck gold with quite a few other Hall of Famers that would make their cardboard debuts in the issue. "Golden Arm" John Unitas, Green Bay's tandem of Bart Starr and Paul Hornung and Detroit's Dick "Night Train" Lane who had been in the league since 1952 are four of the most notable rookie cards. Lane still holds the pro football interception record with 14 for a season. The fact that Lane's record is still intact is truly amazing, given that he set it when the NFL teams only played 12 games a season, one third fewer than they play today!

These icons weren't the only future Hall of Famers to make their first appearances. Tommy McDonald, Raymond Berry and Jack Butler became cardboard heroes with the issue as well. McDonald and Berry were league leading wide receivers and Butler was a standout defensive back. However, Butler is probably more renowned for his work as director of the BLESTO Scouting Combine.

The 1957's are another classic and popular set cut in the 2-1/2 by 3-1/2 inches measurement that has become the size standard for the past 57-plus years. With 154 cards in its make-up, the sheet-printing in their production had to have had some abnormalities. Topps is reported to have used 88-card sheets to make this one, so simple mathematics dictates that twenty two cards on the second production sheet were double-printed. As was the distribution method of Topps in the 1950's and '60's, the set was issued in series, and normally, the "high numbers" still demand a premium in retail pricing. Unitas' rookie card, #138, was pressed in the second production sheet, and is one of the double-prints in the 1957's. His luster coupled with his great level of demand results in a premium price for his first card.

The cards really are an attractive "two-cards-in-one" print effort, with the fronts featuring a portrait shot of the player on the left and an action shot on the right side. The players name appears in bold black beneath the portrait in a white bordered text bar, while the team name and position appear under the action shot in a thinner and also black font. The pastel color backgrounds vary by team. Card backs are also divided into two panels, with a red football in the upper left showing the card number, the players name, vitals and biographical and statistical data covering that side of the back. The right side of the card back contains two cartoons focusing on the player's career. 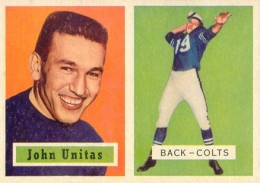 Johnny Unitas, who had been cut by the Pittsburgh Steelers, continued to play semi-pro/sandlot football in the Pittsburgh and was signed on as an undrafted free-agent at a try-out by the Baltimore Colts. In 1958, he piloted the Colts to the NFL Championship in "The Greatest Game Ever Played", the sudden-death overtime win over the New York Giants. He led the Colts to Championship games again in 1959, 1964, 1965 and 1968. Although being injured, he played in desperation in Super Bowl III against Joe Namath and the New York Jets. He returned healthy and became the first quarterback to win NFL Championships AND American Football Conference titles, as the Colts switched divisions after the AFL-NFL merger. Unitas left Baltimore after the 1972 and finished his career with the San Diego Chargers. 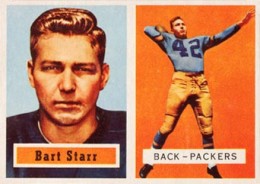 Bart Starr was an All-State and All-American high school quarterback in Alabama after almost quitting football as a scholastic senior. He chose to attend the University of Alabama, but played sparingly. He did manage to throw a touchdown pass in the 1953 Orange Bowl, a 61-6 win over Syracuse and led the Crimson Tide to the Cotton Bowl versus Rice the following year. Never able to recapture his earlier collegiate glory, Starr was invited to the Blue-Gray College All-Star Game and was referred to the Green Bay Packers by Alabama's basketball coach, Johnny Dee. Green Bay, in the pre-Lombardi years, took Starr on the 17th round of the annual draft (that's not a typo, the Hall-of-Fame member Starr was chosen with a very, very late selection). The rest, however, is history, as Starr and Lombardi led the Packers to NFL Championship games six times, losing only his first one in 1960 to Philadelphia. He was the quarterback of the first two Super Bowls, victories against the American Football League Champions Chiefs and Raiders.

Starr's Packer teammate, Paul Hornung, the Heisman Trophy winner from Notre Dame, also made his card debut in the 1957 Topps set. Hornung is the only Trophy winner to have been elected while playing for a losing collegiate team as the Fighting Irish managed to beat only Indiana and North Carolina in 1956. By virtue of his incredible versatility, the multi-talent played fullback, quarterback, safety, kicker and punter which gained him the votes he needed for the win. While Unitas was the "Golden Arm", Hornung was the "Golden Boy." The tall, talented, blonde-haired, blue-eyed lad with movie star looks also had a "playboy" aura and was a fan and media favorite. Joining Green Bay at the dawn of the Vince Lombardi era, Hornung was the offensive star of the famous "Green Bay Sweep," winning numerous MVP and All-Pro accolades and setting an NFL scoring record for touchdowns, extra points and field goals. Hornung and Jim Taylor provided pro football with arguably the most feared one-two running back punch the game has ever seen. With Starr at the helm of the Lombardi ship, Hornung enjoyed six league pennants and was with them for the first Super Bowl triumph, leaving for the New Orleans Saints expansion club in his final season of 1967.

Besides legends, immortals and greats, the 1957 set also featured a few printing hiccups, miscues or errors. The set included a checklist, but it is printed in two different color schemes, one red, blue and yellow, the other red, white and blue, whether intentional or by error. The Los Angeles Rams defensive back, Will Sherman, whose card names him as "Bill", is found with and without the team name, Rams missing on the card front. The "action" photo of Sherman also grabs attention, as he appears to be "diving" out of the card right at you as his raised arm tries to catch a football.

The "regular" cards, the stars and the rookies form the general-interest portion of 1957 Topps' story, but there are also two sub-plots that have captivated enthusiasts for 50 years. In a very real sense, 1957 Topps Football solidified the importance of two specialty elements, the "Error Card" and the "Checklist."

The former is occasionally observed on card #58, which features the Rams' Willard "Bill" Sherman. In a very few instances, the team name (which should occupy the caption block at the card's right side) was left unprinted. Sherman is left soaring in a midair "action" portrayal on these rare "Error" pieces, and the cards look strangely incomplete. Although misprints were nothing new to trading cards, "Sherman" No Team - has steadily gained popularity as a scarce and quantifiable variation piece of which, significantly, a much more plentiful "Corrected" version was produced. 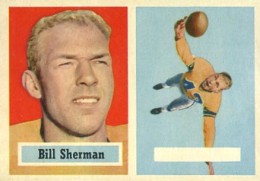 Checklist cards engage the imagination in a different way. Although Topps had tossed a few of these cards into the company's Baseball and Football packs in 1956, the concept remained fundamentally untested. The jury was still out as to the cards' innate desirability. Did a young consumer, hoping for a big star, derive pleasure upon receiving a lackluster checklist card in his penny pack? In hindsight, it looks like the confectioner was simply undecided about checklists in 1957. Topps made the card (in two different color schemes) but seeded them into packs only sparingly. So, the football specialist of today not only has to find one of the very challenging pieces, but typically aspires to locate the item in respectable, unmarked condition too . . . not an easy task! Topps elected to add checklist designs to the backs of its Team Cards in 1958, and later solved the matter altogether by incorporating the items into regular sets as standard numbered cards. Still, the un-numbered 1957 Topps Football Checklist card stands as a special milestone and is among the most sought after of all vintage football card sets for its unique design and its incredible array of Hall of Fame rookies. As desirable as they are, though, they're a lot easier to find than the checklist!

The player selection and the fantastic eye-appeal of this set make is one of the most popular and highly desired football cards Topps ever issued. The values of the cards make it alluring as well. Like most sets, the first and last cards, #1 Eddie LeBaron and #154 Fred Morrison, are always sought in high condition (a LeBaron in a PSA 9 MINT recently sold in the $1000.00 range and PSA 8 Morision's have been consistently over $1000.00 on the rare occasion that they are offered).

Market pricing information about the set will show a complete set in higher grade can be summed up in one word: EXPENSIVE. Partially the result of poor printing standards, high grade single cards in the upper reaches of the grading scale are staggeringly pricey. Recently, PSA 8 NM/MT and PSA 9 MINT examples of Unitas and Starr have returned their owners some significant returns. Unitas has sold consistently at over $4500.00 in PSA 8 and the last PSA 9 sold for over $27,000.00 in 2012! Starr, even more difficult to find in high grade has been regularly over $6500.00 in PSA 8 and one of the only three PSA 9's would probably set price records for the set if offered today!

Don't be scared off by the prices, there is still plenty of value and plenty of opportunity to add these cards to your collection if you're able to be patient and will look in the "sweet spot" of the mid-grades. The eye appeal of some EX and EX/MT cards will rival the NM/MT and MINT cards and will be a fraction of the price. A nice PSA 6 EX/MT example of the big guns can actually be had for about 10% of the PSA 8 NM/MT price. Granted, this is a ballpark range, but finding a nicely centered, EX/MT example is probably the most prudent way to build this set.

Just Collect is always on the lookout to buy these classics, as well as most other vintage football, high-quality baseball, basketball, hockey and non-sports cards from 1879. Contact us today if you have any of this great material for sale.