Football cards had been something of a hole in the Topps lineup leading into the 1955 season. Having never had the rights to produce trading cards of professional players, Topps' two previous football sets (1950 Felt Backs and 1951 Magic) were somewhat uninspired issues featuring contemporary collegiate athletes. However, with their popularity in the baseball and non-sports arenas, the release of a significant football issue would make Topps the premier trading card company. Therefore, after a four-year hiatus from the production of any football trading cards, Topps re-entered the market in 1955 with their All-American series. The set was their most advanced football issue to date, with 100 full color, 2 5/8" x 3 5/8" cards featuring collegiate All-America selections over the prior several decades. With not a common player in the set, every card featured a significant name in college football history.

Additionally, the cards themselves were visually stunning, especially so at the time. Large, colorized player images were super-imposed over black-and-white action backgrounds. Colorful school mascot logos were set opposite red, white and blue All-America shields, while colored inner and white outer borders complete the card. The result is a classic look that has stood the test of time, and remains exceptionally popular with collectors to this day. 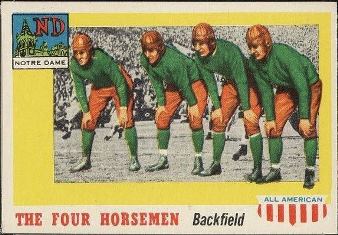 While the entire set was released as a single series, 32 of the 100 cards are considered short-prints due to being printed on 110-card sheets. Beckett guides consider 73 of the 100 1955 All-Americans to be rookie cards, a staggering percentage in comparison to most other sets. Of those 73, those of greatest importance are Heisman Trophy winners Doc Blanchard and Tommy Harmon, collegiate and professional legends Ernie Nevers and Don Hutson, and influential coach Amos Alonzo Stagg.

Another one of the set's most notable cards is also a rookie, but one designed in an atypical format. Card #68, The Four Horsemen, features the famed Notre Dame backfield of the early 1920s, so named by sportswriter Grantland Rice. Quarterback Harry Stuhldreher, left halfback Jim Crowley, right halfback Don Miller and fullback Elmer Layden are all shown, hands on knees, ready to break the huddle and line up just before unleashing devastation on their opponent. The popularity of this short-printed card is born out in the PSA Population Report, which shows #68 to be the second-most-graded card in the set. Over the last decade, there have been less than twenty public sales of this card in PSA 9 Mint condition, with the most recent coming out of Mile High's auction in August 2016. The PSA 9 example sold for $5,036.18 - which was a 33% increase in value over the last sale earlier in 2016. Here's a look at the last five PSA 9 auctions:

Among the other gridiron legends that make appearances in this set are fabled Notre Dame head coach Knute Rockne, Slingin' Sam Baugh of the TCU Horned Frogs, and University of Illinois star running back Red Grange. The other most-graded card in this series, running neck and neck with The Four Horsemen, is card #37, which features Jim Thorpe, perhaps the greatest American athlete of the 20th Century. He has a number of trading card issues more contemporary to his playing career, but the pure aesthetics of this card with Thorpe shown full-bodied in his red Carlisle jersey and tan football pants, practically demand an elevated status all its own. With no 10s yet graded, PSA 9s are the pinnacle for this card in terms of condition. From an all-time high sales price of $11,860 in 2007, the price on the '55 Thorpe has dropped significantly in recent years. The latest price realized in a public sale of a PSA 9 Jim Thorpe was $5,100 in REA's May 2016 auction.

In terms of error cards, there are really just two. Cards #14 and #21, Whizzer White and Gaynel Tinsley, can be found with card backs pertaining to the other player. The error was recognized early and corrected versions of both cards were released, but not before a number of the originals found their way into the hands of collectors. The errors do command a higher price than the corrected versions. Other, less documented wrong backs can be found, though not in quantities enough to consider them to be documented errors.

Just Collect, Inc. is always looking to purchase 1952 Bowman Large Football cards and other vintage baseball, football, basketball and hockey cards. Our staff of well informed, customer service representatives are ready, willing and able to help you with any sports card questions that you may have. Additionally, Just Collect's experienced sports card specialists can answer most of your detailed or specific questions.