In the early days of autumn, the Bowman Gum Company of Philadelphia, PA was beginning the backside of their football manufacturing career (they would cease production just a few short years later with the 1955 Bowman set). Topps Chewing Gum, today’s giant, had just entered the baseball card market and was still several years away from their first professional football issue (they released the collegiate 1951 Magic Set as well as including some football cards in the wide range of topics featured in their 1948 Magic Photo Series). The Bowman Football cards produced in 1952 remain among some of the most widely acclaimed artistic renditions of any sports card, and featured both the best of the professional ranks and many collegiate players.

The set featured colorized renderings of both established professional players and newly drafted collegians, depicted donning their college duds. The National Football League (NFL) was the only pro game in the States and was beginning to gain significant footing among football fans when compared to the incredible popularity of the collegiate game that ruled the game of football for decades. But this was a big new world, and a big new market, and Bowman decided to try to go LARGE!

Primarily a result of the success of the large format of the 1952 Topps Baseball earlier in the year, Bowman decided to issue an over-sized Bowman Large football series as a parallel to their successful smaller issue that had already been on the drawing board. Similar to the 1951 Bowman issue, the regular (or small) 1952 Bowman cards measured 2 1/16" x 3 1/8", however, the new Large Bowman issue measured a whopping 2 1/2" x 3 3/4" and was either loved or hated by the kids. While both sets had the exact same 144 cards and identical images, data and players pictured, the size difference threw off many. What used to easily fit in change pockets and pill boxes now took up far more room. When placed with the earlier Bowman issues, the new Bowman Large cards literally stood out like a sore thumb. Could a kid complete his set with both Small and Large cards?

The colorized photographic depictions were arranged in both a vertical and horizontal formats, and included respective coaches for each of the NFL teams. Card backs highlighted biographical information, a Bowman-first statistical info (except for linemen) and card numbers. On front, superimposed over of the image of the player or coach was a tilted, two-tailed pennant listing their name and team affiliation. Additionally, the pro or college logo, as applicable, was included. All of this was surrounded by a white card border.

Key rookie cards in the set are Frank Gifford, Art Donovan (one of the funniest and most colorful athletes of the era and a regular on the talk show and convention circuit), Gino Marchetti, Hugh McElhenny, Andy Robustelli, Yale Lary and Ollie Matson. Several Hall of Fame coaches making their cardboard debuts including the legendary Paul Brown, Joe Stydahar and George Halas. In all, 34 current NFL Hall of Fame members appear in the set. Additionally, numerous College Hall of Fame enshrines do as well. 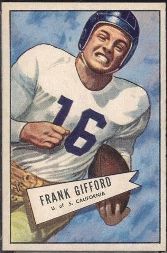 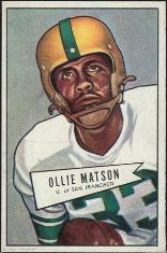 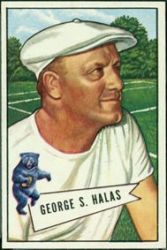 The most notable difference between the Large and Small issues, aside from size, was the scarcity of some of the cards within the Bowman Large set. All cards divisible by 9 in the Large Set are short printed. In addition, the cards immediately after the “short prints” are also short printed, but to a slightly lesser extent. The “divisible by 9” cards are the toughest and include some pretty prominent players! To easily determine a short print from the 1952 Bowman Large Football Set, just add the digits of the card number together and if they are divisible by 9, then the card is a short print (ex: 81 would be 8 + 1 = 9 divided by 9 equals 1).

Theories as to the cause of the short prints have been discussed and argued for years, but the most plausible suggests that the sheet layout (1 through 9, 10 through 18, etc.) and increased size caused the sheets to be cut down to fit and that the edge cards on both sides of the sheets (9’s to the far right and 9+1 to the left) would be sacrificed and discarded.

Secondary short prints aren't just secondary players, as some dynamic stars saddle up within this group like Chuck Bednarik, Art Donovan (Hall of Fame rookie), Ollie Matson (Hall of Fame rookie) and Jim Lansford, which is also the last card in the set and is probably the most valuable in PSA 8.

The 1952 Bowman Large set was neither the first nor the last, but it just may have been one of the most beautiful ever printed. And no matter how you slice it, that’s a pretty large order.

Just Collect, Inc. is always looking to purchase 1952 Bowman Large Football cards and other vintage baseball, football, basketball and hockey cards. Our staff of well informed, customer service representatives are ready, willing and able to help you with any sports card questions that you may have. Additionally, Just Collect’s experienced sports card specialists can answer most of your detailed or specific questions.