American football was derived from a hybrid and Americanization of soccer and rugby. As both sports made their way across the Atlantic, they were both played at colleges and universities, and out of those two games, football was born and first played collegiately in New Brunswick, NJ when Rutgers defeated Princeton 6-4 on November 6, 1869. The game was played under a modified version of the London Football Association rules. These “soccer-style” rules allowed for players to only kick the ball. They could not touch it with their hands. Each score, called a goal, counted for a single point. Unlike soccer, however, there were 25 players on each side, not the standard 11 that would come later. Although the game is historically noted as the first college football game, it was essentially soccer, but still laid the groundwork for what would gradually become the game that we recognize today.

As the popularity of the collegiate game became more than just a northeastern US game, the Mayo Tobacco Works of Richmond Virginia, manufacturers of Mayo’s Cut Plug Tobacco, issued a 35 subject football card set in 1894 that exclusively featured football players from Harvard, Yale and Princeton. Considered the rarest football set ever distributed, as well as the only 19th century set solely dedicated to football, the Mayo’s Cut Plug Set (known also by its ACC designation as the N302 Set), presents many challenges to the advanced football collector.

Printed on a thicker cardboard stock and measuring 1 5/8" x 2 7/8," the brittle black, full bleed borders and solid black reverses easily exhibit even the slightest hints of wear or damage. Within the simple black border, the obverse features a player photo in sepia tone. Below the photo is the player's last name, school, an advertisement for P.H. Mayo tobacco and the slogan, "For Chewing and Smoking." To add to the condition issues, as was the norm of the era, most cards were trimmed and/or glued into albums. 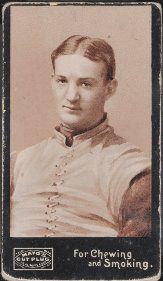 Mayo’s represent the only 19th century trading card set that was devoted exclusively to football. At that time, there literally was no pro football, so this set (issued with cans of plug tobacco) features Ivy League college football players. Mayo Tobacco Works must have lost track of who was who, because a card was produced that was absent of a player name, and was identified as “Anonymous.” Many years later, the anonymous player was identified as John Dunlop – a four-year Harvard letterman who later coached the Crimson backfield. It is the only N302 card without a player or team designation.

Mayo’s also produced a baseball card set during the same era. Both are known for being susceptible to wear because of their black borders, so any example graded beyond “VERY GOOD” is a true rarity. To make matters worse, it was common practice for youngsters to trim the borders or glue the cards into albums for storage. Of the 12 Mayo Dunlop cards graded by either PSA or SGC, half have been deemed “Poor” or “Authentic”. Just one has graded even as high as VG-EX. Even the lowest grade Authentic and Poor examples of the Dunlop sell for thousands of dollars with GOOD or better selling in excess of $10,000.00! A complete set of 35 Mayo Football cards, regarded one of the very few ever pieced together (but still averaging no better than about a ‘2’ grade), sold at auction several years ago for more than $35,000!

Several interesting stories can be told of players in the Mayo Football Set. One of the more intriguing is Neilson Poe, of Princeton, younger brother of All-American quarterback Edgar Allen Poe and second cousin of the famed writer Edgar Allen Poe (yes, the cousins had the same name) and was injured while fighting for the Allies in WWI. He was later awarded the French War Cross and the Distinguished Service Cross. George Adee, of Yale, was inducted into the International Tennis Hall of Fame and was a member of the Davis Cup and Amateur Rules Committees as well as being president of the United States Tennis Association. 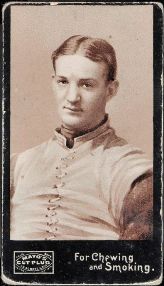 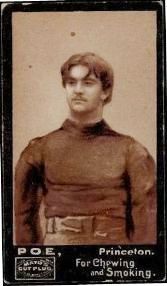 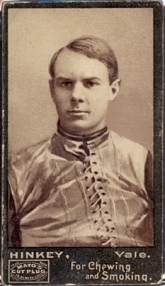 Football cards and football collecting has often been treated as the redheaded stepchild when compared to baseball cards. In their humor book, the Football Uncyclopedia, Michael Kun and Adam Hoff compare football card collectors to baseball card collectors claiming that "Baseball fans keep their old baseball cards in firm plastic sleeves and include their baseball-card collections in their wills" while "Football fans could not give two craps about collecting football cards" which they present as "Exhibit A for why football fans are smarter than baseball fans." The comparison is even more apt when comparing the Dunlop with the Holy Grail of baseball card collecting, the T206 Honus Wagner. Even though the baseball ‘Grail’ is far more valuable, it is also far easier to locate and creates headlines when one comes to market. With the general hobby assumption that there are about 75 T206 Wagners, the even more limited quantity of the Mayo Dunlop points out the scarcity of the card. There are about 15 known copies of the Mayo Dunlop in the hobby. That total is about one-fifth the total of known T206 Honus Wagner.

The most famous T206 Wagner, once owned by Wayne Gretzky, was recently purchased by Arizona Diamondbacks owner, Ken Kendrick. The hobby has become accustomed to seeing sports owners and executives purchase rare cards like this for their collections, or for investment purposes. Now think about this, if every NFL owner wanted to own one of the greatest football cards in the world, the John Dunlop “Anonymous” Mayo, there probably wouldn’t be enough to satisfy the owners from just the AFC or NFC, let alone all 32 NFL owners!

Just Collect, Inc. is always looking to purchase 1894 N302 mayo’s Cut Plug Football cards and other vintage baseball, football, basketball and hockey cards. Our staff of well informed, customer service representatives are ready, willing and able to help you with any sports card questions that you may have. Additionally, Just Collect’s experienced sports card specialists can answer most of your detailed or specific questions. When you are ready to sell your football cards, give us a call!