If you ask the common football fan today about who "Johnny Football" is, they'll think about a spoiled Heismann Trophy winner whose spent more time in and out of trouble (and rehab) than on the football field. For the more hardcore and longtime football fans who don't know or even care about the troubled career of Johnny Manziel, the original "Johnny Football" is someone who earned that title and to this day, is still considered one of the greatest quarterbacks to ever step onto the gridiron: Mr. Johnny Unitas.

Unlike Bradshaw, Elway and Marino, Johnny Unitas was not a first-round draft pick that was projected to be the face of the league; rather he went in the 9th round of the 1955 NFL Draft to the Pittsburgh Steelers, and was released before the season even started because they had too many quarterback on their roster.

After being out of professional football for a year, working construction and playing semi-pro football for $6 a game, the Baltimore Colts signed Unitas, beating out the Cleveland Browns for his services. After a rough first season where he spent most of the time on the bench and playing mop-up duty, he rewarded the Colts for their patience in his second season. He lead the league in passing and won the 1957 NFL MVP Award.

Unitas went on to win three more NFL MVP Awards during his career (1959, 1964 and 1967) and also lead the Colts to win Super Bowl V over the Dallas Cowboys. Johnny also led the Colts to a championship in 1958, with a 23-17 overtime win over the New York Giants, in the game that is now referred to as "the greatest game ever played". It was the first game to ever go into overtime, and the game was also watched by a then-record setting 45 million people.

Unitas played 18 years in the league, 17 of which were with the Colts, and the last one with the San Diego Chargers in 1973. Unitas was inducted into the National Football Hall of Fame in 1979 and his number 19 was retired by the Colts as well; his number 16 was also retired by the University of Louisville. He ended his career with over 40,000 passing yards, a feat that only 15 other players have ever accomplished; and out of that group of quarterbacks, he's the only one to have played in the "run-heavy" 1950's.
1957 Topps #138 Johnny Unitas Rookie

With Unitas' historic career in the NFL, it makes his 1957 Topps rookie card one of the most desired cards for any collector to pursue; whether it be a general collector of cards or a football card collector. The card definitely embodies the "vintage look", as the left half of the card portrays Johnny's legendary smile and flat-top, and the right half features his iconic throwing motion. Both images are a bit grainy, but they are placed upon vibrant orange and green pastel backgrounds, separated by a white border, which creates a nice "pop" of color. The back of the card is also split in half, with the left side featuring player information, stats, and a short bio; with the right side featuring a small cartoon talking about the beginning of Unitas' career. Before he was known around the world as "Johnny Unitas", the 1957 Topps rookie card treats him like a rookie and not an NFL star, since it has him listed on the front as "John" Unitas, his given name. By 1959, Topps (like the rest of America) had identified Unitas as being "Johnny", and made the switch on the front of their cards. But, for some odd reason, after 1962 they switched back and forth between "John" & "Johnny", and no one really knows why.

If you are fortunate enough to have a Johnny Unitas rookie card in your collection, you have a very valuable piece of history on your hands. Especially in high grade, Unitas' rookie card continues to hold it's value year after year. And in MINT condition, it continues to gain value every year, because there are no GEM MINT (PSA 10) examples. To date, PSA has only slabbed seven PSA 9 MINT examples, and there have only been four public transactions of that card. The last example sold in 2012 through Mile High, and realized for $27,205.80, which was $6,863.50 higher than it's previous sale in 2010. The first PSA 9 example to sell publicly was in 2009, and went for $15,457.10. In this case, the value of his rookie card has almost doubled in the last 6 years. So, if a PSA 9 rookie of Johnny U can sell for $27,000, just imagine what a PSA 10 in perfect, prestine GEM condition can sell for? It would be some serious, life-altering money. Which also begs the question, will the hobby ever see one? Only time will tell. 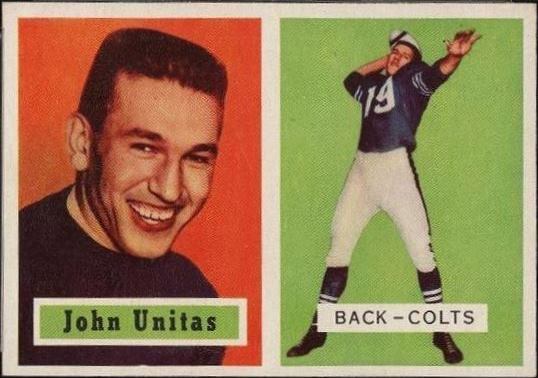 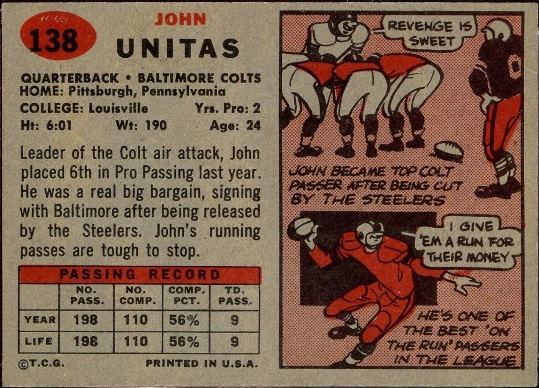 Even for the novice collectors out there, you don't need to break the bank to own one of the greatest football cards of all-time. Mid-grade examples are affordable, and would add great value to any type of collection. Unitas' rookie card is most commonly found in EX/MT condition, which is worth about $400, a figure that has increased about 33% over the last 4 years. The Unitas card is generally one of three rookie cards that are extremely sought after in the 1957 Topps set, with Bart Starr and Paul Hornung being the other two. However, the original "Johnny Football" is the more valuable and most sought after of the three.

When talking about the best football cards in the hobby, we consider the 1957 Topps Johnny Unitas rookie to be in the top-5. PSA recently came out with their "Mount Rushmore of football cards", and they happen to agree with that notion.

Interested in finding out how much your Johnny Unitas card is worth? Give us a call today to find out. We offer free appraisals on all vintage cards and collections, so contact one of our specialists today!