Brown's Rookie Is One Of The Best Cards Ever Produced

If you look at the value of an NFL running back today, it's high and short-lived, and that's because they are run into the ground, getting 200, 300 or even 400 touches a season. By the time they reach the age of 30, they have either lost a step, are prone to injury, or replaced by someone younger with "upside" - and their services in the NFL are no longer needed.

But that wasn't the case with Jim Brown, who played until he was 29, and left the NFL on his own terms instead of the game not wanting him around - just like Barry Sanders did some 17 years ago. Brown, a four-time NFL MVP Award winner, an NFL Champion with the Cleveland Browns in 1964 (yes, a championship with the Browns does sound odd), and an eight-time rushing champion, decided to step away from the game when he was at his peak and was considered the best player in the sport. He ended his career with over 12,000 rushing yards, over 100 rushing touchdowns, and averaged over five yards a carry - and is the only player in NFL history to accomplish that feat. (Pro-Football-Reference).

Instead of continuing his dominating career on the gridiron, Brown traded the helmet and shoulder pads to become a movie star and an analyst; ventures he still does to this day, as you can see him making an appearance in the 2014 film, Draft Day. And if you want to see an extended acting role from Brown, he was in the popular movie Any Given Sunday with Al Pacino.

Some feel that Brown retired too soon from the game because he was still in the prime stages, but even so, when he left, he left a tremendous legacy in the league and is still considered one of, if not, the best running back and even overall football player to ever grace the NFL. His 12,312 rushing yards are eighth best among all­-time rushers and his 1,863 yards rushed for in 1963 is the 12th best rushing season in league history; the 1,863 yards also remain a Browns record to this date. His number 32 was retired by the Browns and was enshrined into the Pro Football Hall of Fame in 1971; he was also inducted into the College Football Hall of Fame in 1995 for his career at the University of Syracuse.

Because of this historic career that Brown had, it is why his 1958 Topps Rookie Card is one of the most collected cards; for both Brown cards and for any football card in itself. 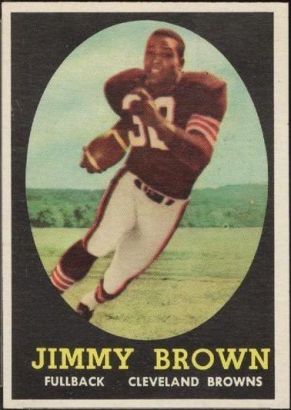 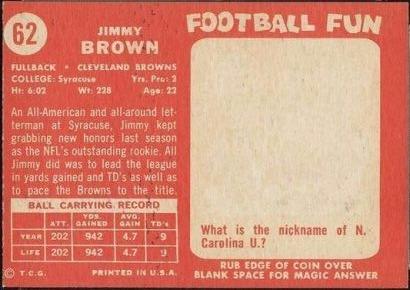 This card really stands out due to it's one of a kind design. The card features the 22-year old Brown in a running pose, inside of a brown oval, which is inside of a white border. This creates a tremendous focus on Brown, and really makes the image pop. Your eye is also drawn to the bottom of the card, where you'll see bold yellow lettering spelling out "Jimmy Brown". The Brown rookie, along with the entire 1958 set, has been known for it's centering issues, which goes back to card manufactures and their lack of quality printing. When you pair that with the fact that the card is over 50 years old, finding a sharp, well-centered Jim Brown rookie card is an extremely hard task. That is why the hobby has never seen a Gem Mint example, and the reason why there are only five Mint examples (out of 2400+ submitted to PSA).

The back of the card features a red background, with the card number found in the top left corner, and some history and statistics from his rookie year underneath. Brown's rookie year was the year before, so you'll see his career stats read 202 attempts for 942 yards and nine touchdowns - not a bad first season! The entire right side of the back of the card features a box for a trivia question, labeled "Football Fun". To get the answer to the question, you would need a coin to scratch off the area.

Several years ago, Just Collect actually pulled a Jim Brown rookie card from a cello pack, and got it graded right away. It came back an SGC 92 (equivalent to a PSA 8.5), and sold for around $3,000. Just Collect's President, Leighton Sheldon, admitted that while it was a great card to sell, he still wishes that he had it in his possession, because of how truly nice the card really was. "It was closer to a 9 than an 8.5."

The Brown rookie card was recently named by PSA as one of the cards on their "Mount Rushmore of Football Cards", just as was the 1957 Topps Johnny Unitas rookie card we recently discussed and reviewed.

While we've seen the high-end market for Brown rookie cards take off, the mid­-grade examples have remained steady over the years. A PSA 5 example is worth about $350, and a PSA 6 is around $500. The PSA 7 NM is where you notice the card's value reach four digits, as that card goes for between $1000-$1200.

Of the 1958 Topps set, the Brown card is by far the gem and best card of the set. There are others that have solid value; the Johnny Unitas card at a PSA 8 level is worth $600 and the Bart Starr card also at a PSA 8 is worth about $275, but none compare to the Brown rookie card.

With the running back position slowly diminishing over the last few years, it puts Brown's career into real perspective, and shows just how special of a player he was. Because of that, the value of his cards, especially the 1958 Topps rookie card, will likely never diminish and will continue to be a great investment - for all types of collectors.
Contact Just Collect, Inc.

The experts at Just Collect can answer any questions you may have about Jim Brown and his memorabilia. We are always buying Jim Brown cards, autographs, and game-used memorabilia, so contact us today if you are looking to sell!