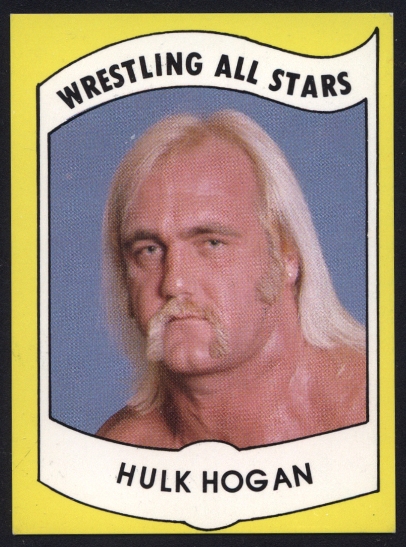 The debate rages forever.  Is wrestling a sport or is it entertainment?  When I was a kid, my friends that loved wrestling swore that it was as sport and some even insisted that the action was real.  Today, I think that most reasonable people can agree that the outcomes in professional wrestling are predetermined and the matches are choreographed, but while it still may not be considered a sport by some, there is little doubt that the wrestlers are indeed athletes.

Many wrestlers were successful athletes in other sports, so not recognizing their athletic feats is silly.  How many 250-300 pound men do you know that can jump from the top of the turnbuckle while launching themselves into another wrestler and get up and walk away.  Heck, most men that I know would have a hard time climbing the ropes, let alone jumping 8-10 feet in the air.

There are many other wrestling sets and sets that include wrestlers, including 19th Century issues including Allen & Ginter, Goodwin Champions and many specialty issues. Some of the more notable sets that were dedicated to wrestlers post WWII included the 1955 Parkhurst Wrestling Set issued in Canada, the 1982-83 Wrestling All Stars Set highlighted by this blog and the 1985 Topps WWF Set which included 66 cards and 22 stickers.

Where Did They Come From?

The Wrestling All-Star set was advertised by Pro Wrestling Enterprises as "The first set ever of real professional wrestling trading cards with full color photos of thirty-six top stars". If you were a reader of the Wrestling News Magazine or just spotted the advertisement while waiting on a doctor's appointment, you could've owned these sets by simply sending a $5.00 payment and you would receive a complete set of 36 cards which were tightly, too tightly often times, sealed in plastic. Sister publication, The Wrestling Revue also carried ads for the cards.

Issued in three different sets of 36 cards (yes, I know we mentioned 33 cards in the video - Ooops) during 1982 and 1983, the sets are identifiable by the reverse.  Each set has a specific reverse color and the copyright notes 1982 Series A, 1982 Series B or 1983 Series A.  You can find the checklist for each of the three series further down in this blog.

Some serious collectors of this issue have suggested that there may have been less than 2,000 sets issued (some argue there may have been even less) and that Wrestling News continued to advertise them for several years.  Little did anyone know the value that these sets would reach.

The 1982 Series A Set is the one that most collectors flock to.  The inclusion of Andre the Giant and Hulk Hogan are the primary draws, but there are so many other stars including legends like Dusty Rhodes, Bob Backlund, Bruno Sammartino, Ric Flair and Jerry Lawler.

The least popular of the sets is the 1982 Series B, but that doesn't mean that they're worthless.  Far from it!  Factory sealed Series B Sets will still command hundreds of dollars and inlcuded the likes of Ricky Steamboat, Sergeant Slaughter, Greg "The Hammer" Valentine, former Minnesota governor Jesse "The Body" Ventura, Tito Santana and The Iron Sheik.

The 1983 Series A Series, which is a bit easier to find in both unopened and in higher grade condition, featured Jimmy Hart, Fred Blassie, Captain Lou Albano, The Grand Wizard and Sheik Al-Kaissey (aka The Iron Sheik) are some of the most famous managers in the history of wrestling and all appear in the 1983 set.

The "Wrestling All Stars" Video: