The Original Owner Kept this One . . . Until Now 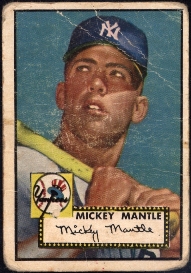 I've Got A Mantle Well, that's not exactly what the inquiry said, but it was pretty straight-forward and simple.  The inquiry came in through Just Collect's online submission form and the query included a front and back image of the card.  The card?  Oh, just a 1952 Topps #311 Mickey Mantle card . . . one of the hottest cards in the hobby at the moment. The collector that contacted us said that he started collecting cards when he bought his first packs when

Often hailed the “First and Last” set, the 1972 Topps Football set featured the inaugural appearance of the “Leader” and “Pro Action” cards in the 1st Series and ironically, was also the last year that Topps issued football cards in series.  The 1st Series packs boast 10 cards, with the potential of Hall of Fame rookie cards of John Riggins and Ted Hendricks as well as many other greats of the gridiron.  We haven’t opened a vintage football pack in months, so we were rather