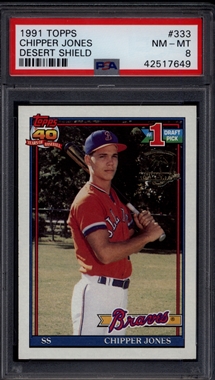 Cards Printed For Military Personnel  We've had sets and we've had wax packs of the very limited Desert Shield issue in the past. In fact, one set, which we wish we had thought to do a video on, was what we would call a "Factory Set." It came from someone that had picked it up near the Duryea, PA Topps office. It had been donated buy Topps for a Scranton/Wilkes-Barre area school's charity auction and was housed in the

We were at it again this week. Another extraction mission carried out perfectly by our trained team of professionals, or as they're known around here, Sealed Team Six. The target this time was an unopened pack of 1991 Topps Desert Shield Baseball cards. Originally intended for United States soldiers serving in Iraq during active operations, the set is one of the more prized baseball issues of the last thirty years. The cards themselves look exactly like their 1991 Topps counterparts with the exception of a gold foil stamp on the front featuring a palm