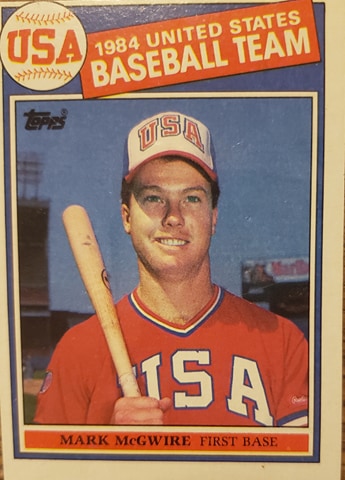 Remember drooling over all of your Mark McGwire and Sammy Sosa cards in the Summer of 1998, when both sluggers were zeroing in on Roger Maris’ single-season home run record of 61?  Those cards were going to pay for a college, right?! Then came the Steroid Scandals and by 2004, you put the cards in storage as the values completely tanked.  Get digging in those old boxes again because your Big Mac and Slammin’ Sammy cards are on FIRE today as ESPN sets to air the newest 30 for 30, “Long Gone Summer”, about that magical season.  Check out how much some of your card values have spiked to!


I vividly remember walking into a card shop on Main Street in Cooperstown, NY., next to the Baseball Hall of Fame, in July of ‘98 and putting down $125 for the 1985 Topps Mark McGwire rookie card.  I opened a full set of 1990 Score and set the Sammy Sosa rookie aside.  During the 1998 MLB season, both McGwire and Sammy Sosa put the game on their backs and slugged their way to what ultimately became the new, single-season home record.  Baseball had been running stale since the 1994 strike, and McGwire and Sosa were just what the sport needed at a lackluster time.  McGwire and Sosa rookie cards, despite being mostly in the “junk wax” era, were put right into screwdowns during the home run chase.  I was sure I could flip my rookies for big cash.  When McGwire hit home run number 70, I had already tripled my investment on a single card.  Then came the Steroid Scandal in 2004…and away went my dreams of building a Scrooge McDuck money bin; the cards became worth less than the cardboard they were printed on.  Even over a decade later in 2016, a full 1985 Topps set was selling for just a measly $20.  Not $200 - $20.  Thankfully I swallowed my pride and didn’t take a loss; I held onto my cards.
If you did the same thing I did, believe it or not, you should pull your cards out of storage NOW!

Several factors are causing a massive spike in cards that just months ago were worth a fraction of what sales are bringing in today.
1. Lack of Sports: With few new things on TV, anything sports-related for entertainment is HOT.  Long Gone Summer should draw HUGE ratings.
2. Boredom: Quarantine has put a lot of free time on your hands - time spent looking into your old hobbies.
3. PSA is backed up:  PSA had long wait times pre-Covid.  Now PSA has no timetable for returning graded cards.
4. Closures:  Covid has shut down local card shops and some on-line business.


With no sports, product, or grading of product, having plenty of time, and the pending McGwire & Sosa 30 for 30 on deck, card prices of SOARED.  Seems that buyers are expecting to see values of McGwire and Sosa cards explode due to the 30 for 30, much like Michael Jordan card prices skyrocketed during The Last Dance.

Just look at the PSA 10 rookie sales on eBay of McGwire and Sosa both pre-ish-Quarantine and today.  Below are three sales prior to quarantine (or there about) and three recent sales:

Just look at how those sale prices jumped in just the last three months!  Are these cards going to hold long-term value, though?  The craziest jump here is the 1987 Topps Mark McGwire card, which you could have purchased for $30 three months ago, is now $300!  1987 Topps: the epitome of JUNK WAX.

Before you comb through your boxes hoping for riches like we did back in 1998, just remember the factors that are driving this card price up now.  Not to play predictor or steer you in the wrong direction, but eventually all of those factors will (hopefully) go subside, and most likely as will these junk wax price inflations.  The PSA 10 population report for the 87 Topps McGwire is at 1,060 examples out of 9,621 submissions; an 11 % rate.  While that percentage seems low, compare that to the 85 Topps McGwire of 301 10’s out of 45,262 submissions for a rate of 0.67%.  More importantly, despite the high-dollar sales of the 87 Topps card, you can still buy a full box of 36 packs for about $35; right around a dollar per pack!  I know what you’re thinking – buy a box, pull three McGwires and grade them at PSA for $20, then cash in!  Wait – PSA is backed up, remember; your card may not come back in a timely fashion.  Many other collectors are probably have the same idea, too – the market will be flooded, decreasing the value.  When the four factors above are no longer factors, there is a pretty good chance that prices will level back down on the junk wax like 1987 Topps. HOWEVER, if you were smart enough to stash a PSA 10 back around 2004, you might want to put that up eBay before Sunday!

While the 87 Topps McGwire, and most Sammy Sosa rookie card prices will probably fall back down to Earth sooner than later, the 1985 Topps McGwire is still a valuable card even if prices do sneak back to what they were in April.  I’ll still be holding on to my original, $125 1985 Topps McGwire ☺

While you’re going through your stack of cards, check out a few of the McGwire and Sosa rookies or hot cards of the 90’s below to see which cards you had around 1998 and what they may be worth this weekend:

Even if values do not hold, and I don’t get my money bin, McGwire and Sosa cards are at least bringing back fond memories of an amazing season.  After you watch, let us know what you think of the new 30 for 30 on our Facebook page.

WE ARE BUYING!  You may not have an unopened box of 1985 Topps baseball cards or a PSA 10 McGwire rookie, but perhaps you stumbled on something else pretty cool that you stashed away in the Summer of 1998.  Reach out any time at (732) 828-2261 or info@justcollect.com for a FREE appraisal.