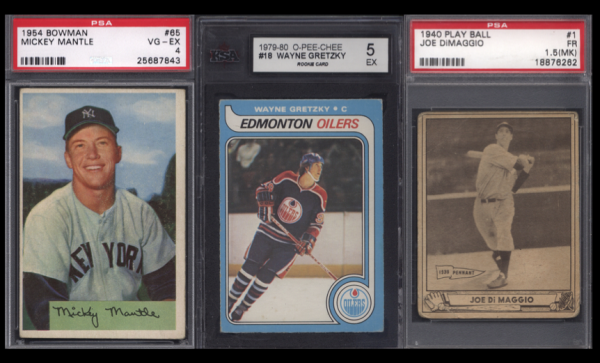 A few weeks ago, a gentleman named Harold from Canada contacted us through our website. He explained that he is a long-time collector looking to change the focus of his collection. He had about 500 baseball and hockey cards spanning more than 100 years that he was looking to sell. We thought this would be a fairly straightforward transaction, but it did not exactly turn out that way.

At first, Harold was adamantly against sending his beloved cards down to the states. He had never before sold any part of his collection at all, so he “wasn’t sure how this was going to go.” Scott, our Vice President tried to convince him that shipping the cards is safe, and that we will cover all costs associated, but he would not budge. Because of his apprehension, he requested that we conduct an evaluation based solely on the scans of the cards without actually seeing them in person. It can be very difficult to judge condition based on scans alone, so we don’t usually do this --- but we decided to make an exception in this case.

The collection was made up of a pretty wide variety of cards. He had examples from the dead-ball era, (t206s and t210s) all the way up to some modern stuff. He had a particular focus on hockey cards --- three 1979 Wayne Gretzky Rookies (two Topps and one O-Pee-Chee) and various examples of other legends like Gordie Howe, Bobby Orr, and Guy Lafleur.

He also had a strong group of baseball cards from the 40s 50s, 60s, and 70s. Along with a whole slew of Mickey Mantle cards (mainly Topps and Bowman) he had examples of Jackie Robinson, Ted Williams, Willie Mays, Joe Dimaggio, Sandy Koufax, Ernie Banks, Stan Musial, Pete Rose, Reggie Jackson, and more.

We reviewed the cards and made Harold an offer. At first, he didn’t exactly agree with our assessment of his collection. He thought his cards were in slightly better shape and they therefore would command seriously high prices. At one point, mentioned that he might just try to sell his cards at a local show in Canada. However, given that the Canadian Dollar is particularly weak at the moment, he reconsidered.

In the interest of transparency, and to help ease his mind, we showed him listings of past sales of some of his cards on vintagecardprices.com, a paid resource that appraises cards based on recent sales on eBay and in auction houses.

Card by card, we went through the site, and explained that these prices reflect an accurate picture of what value his cards will command in the marketplace. After a few more days of negotiation, he sent us the cards, and we finally reached an agreement.

In a testimonial that Harold was kind enough to provide, he explained, “Never during the process did I feel tricked, unsafe, or nervous about what type of company or person I was dealing with.”

He added that, “the way Scott determined values and his explanation or justification for them was very easy to comprehend. […] He always replied within a day which meant a great deal.”

As sports card fanatics, we totally understand that some collectors are weary of selling and have sentimental attachments to their cards. We like our clients to feel comfortable throughout the process. If that means walking them through exactly how we determine a fair market price, we’re happy to do that!

We also love to buy internationally. We've dealt with collectors all over the globe. Check out this other Canadian group we purchased last year that included one of the holy grails of our hobby, a 1952 Topps Mickey Mantle rookie card.

If you’re thinking about selling your sports cards, but aren’t sure about what their worth, reach out! We’ll give you a free appraisal, explain how we reached the number, and make you an offer --- no pressure and no obligations.