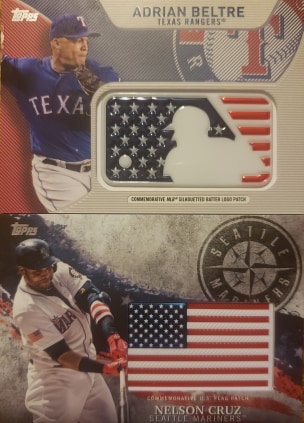 With Independence Day coming up on Saturday, we’re missing a huge staple of Summer; BASEBALL won’t be in full swing!  After a nice afternoon of grilling, before you make your way to the local fireworks display, nothing is better than watching MLB on the Fourth of July.  Since we’re lacking the holiday games in 2020, get a little baseball love back in your life with some awesome Independence Day-themed collectables.


When you think July 4th, baseball comes to mind; America’s pastime.  Picture you holiday weekend and how it would normally go if there were no Pandemic: hot dogs, beer, MLB, and fireworks.  Sadly, baseball players and owners could not work out financials in time to get meaningful games on the field by Independence Day.  Without the game in our lives this weekend, here is a list of unique Independence Day-themed items you can add to your collection!

July 4th, 1941 Lou Gehrig Memorial Ticket - $7,000
“Today, I consider myself the luckiest man on the face of the Earth.”  You know the iconic speech that a somber Lou Gehrig delivered at Yankee Stadium in 1939.   Did you know that the speech was given on July 4th?

One of the greatest hitters of all-time, “The Iron Horse” won two MVP awards even though he batted behind the legendary Babe Ruth, was a six-time World Series champion (three without Ruth), and was so reliable that he played in a then-record 2,130 straight games for the New York Yankees.  Sadly, after a difficult 1938 season, Gehrig, noticing his declining abilities, was diagnosed with Amyotrophic Lateral Sclerosis June 19 - his 36th birthday.  ALS is a disease that caused Gehrig to lose control of his voluntary muscles.   Forced to retire just two days after being diagnosed, the Yankees announced “Lou Gehrig Appreciation Day” on July 4th, between a doubleheader against the Washington Senators.  The team planned to retire Gehrig’s number 4 jersey; the first number retirement in baseball.  During the ceremony, Lou Gehrig provide us with an unforgettable speech; an incredible Independence Day moment in baseball.


Gehrig passed away on July 2, 1941.  The Yankees wanted to honor their former captain with a Memorial on July 4th, on the second anniversary of the “Luckiest Man” speech.  Unfortunately, Mother Nature had other plans, and the memorial was actually on July 6th, 1941. The date on the tickets have the original, Independence Day date.  A stellar Fourth of July piece to add to your shelf in this ticket.

If you missed your chance to buy one of these incredible tickets from Just Collect, you can still pick a PSA graded version on eBay right now for $6,999.

Seven grand is a STEAL for such a piece of history, but that price tag is a little too steep, how about something in the hundred-dollar range?

Dave Righetti, “Rags” to Yankees fans, had a pretty good career on the mound while wearing the pinstripes.  The 1981 Rookie of the Year made two All-Star teams was also the league leader in saves with 46 in 1986.  However, it was one fateful day in 1983 as a starter that Rags made history on the Fourth of July.

The Yankees had not had a pitcher toss a no-hitter since Don Larsen’s perfect game in the 1956 World Series when Rags toed the rubber on the Fourth of July in 1983.  Fresh off pitching his first career shutout, Rags struck out three of the first four batters to start the game.   Ringing up Boston Red Sox early on, Righetti had 7 K’s through the first three innings.  By the fifth inning, the Sox had yet to get a hit, while the Yankees finally plated a run.  The Yankees then tacked on a solo home run from Don Baylor in the sixth inning, while the Sox still rocked a goose egg in the hit column.   After 6 and 2/3 of no-hit baseball, Righetti was in a very familiar place – no-hitting the Red Sox.  Just a year earlier, on June 10th, 1982, Righetti took a no-no against the sox through 6 and 2/3!  This Independence Day, Rags got an inning-ending double play when he was in the same spot, inching a little closer to history.

By the 9th inning, without any hits, the Sox made Rags work for the full accomplishment.  Rags walked the first batter of the inning.  Glenn Hoffman, the player that broke up Rags’ bid a year earlier, grounded into what would have been a double-play, but the ball went wide of first.  When Jerry Remmy grounded out, Rags was an out from history.  Standing in the way of greatness was a future Hall of Famer in Wade Boggs.  The man with just 44 strikes outs in the ENTIRE 1983 season, struck out to end the game.

Dave Righetti threw a no-hitter on the Fourth of July!  If you’re a Yankee fan, a Rags fan, or just want to get a unique Independence Day piece, you can buy a ticket stub from the no-no for just $90.

Like Dave Righetti, James Paxton has a no-hitter under his belt.  However, as we stick with the Independence Day collectibles, “The Big Maple” had an even cooler event happen to him.  What’s cooler than throwing a no-hitter?  How about having a Bald Eagle, the National Bird, land on your shoulder while on the field?

The Bald Eagle is the US National Bird; a symbol of the strength and freedom of the Country. You can’t think of Independence Day without a Bald Eagle.

Paxton was born in our Northern family of Canada, and most likely doesn’t celebrate Independence Day in the US. However, on April 5th, 2018, our symbol of freedom took James Paxton under his wings – literally.

A pre-game flyover with a Bald Eagle was planned for the game between the Mariners and Twins.  The Eagle had other plans, and flew right towards Paxton.  Staying cool as a cucumber, Paxton bravely accepted the bird on his back, and to his shoulder. The outcome of the game is irrelevant after you’ve had a Bald Eagle sit on your shoulder.

You can see the video here, but what you really want is what the Mariners gave away at a game on July 1st, 2018 – a bobblehead of Paxton and the bird!

If you were unable to attend the game, you can buy the bobble to display every July 4th for $16.99.

The Nathan's Hot Dog Eating Contest is on my TV every Fourth of July. Hot dogs and baseball go hand-in-hand, and there's just something so fascinating about a human that can house 70 hot dogs in a sitting.

Since 1979, the Nathan's contest has been held on Independence Day at original company location on Coney Island, NY. While many great eaters have put down plenty of hot dogs, it is Joey Chestnut that reigns king. Winning 12 of the last 13 events, "Jaws" is the current World Record holder at 74 hot dogs and buns in ten minutes. Let that sink in for a second – SEVENTY FOUR hot dogs in ten minutes. That many hot dogs equates to 22,200 calories, 11 X your daily amount.

While it is hard to compare a legendary speech or baseball no hitters to a man that eats hot dogs, but you can't take your eyes off the screen when Chestnut chows down on that many dogs.

You won't be able get your own Mustard Belt unless you can eat 75 hot dogs in 10 minutes and collecting hot dog memorabilia is weird – or is it? You can, however, get a cool Joey Chestnut autograph on a baseball card thanks to Allen & Ginter. In 2008, the company put the hot dog champ on a card and you can own this signed version or only $70!

The National Anthem is the song of the day for Independence Day, and while on OPENING day products, Topps put out a cool variation set in 2017 and 2018 that would look nice in your July 4th collection.

As Short-Print inserts, the Open Day product line that Topps released in both 2017 and 2018 depicted players with hats over their hearts, standing for the National Anthem. ALL the big names in baseball can be had for the Anthem cards – Trout, Judge, Harper, etc.; no shortage of superstars. Fond of Judge, I'd point you to this card for less than $20.

Topps kept with the 4th of July theme in 2017 and 2018 for their flagship set after the Open Day product. Series 2 Jumbo and Hobby 2017 Topps boxes had a patch card with the MLB logo on the card. The logo has white stars in the blue background, behind Harmon Killebrew's silhouette, and red stripes over his bat. The 2018 patches are the flag rather than the logo, with an even thicker design.

The flag, more than the Bald Eagle, makes me think of Independence Day. Both the 2017 and 2018 patch cards also have a ton of star power. How about one of the best hurlers in the game, Max Scherzer, for just $4.50!

You always end Independence Day with fireworks! Since you were a little kid, sitting in in a field on a warm Summer night, watching fireworks in the sky, you've known THAT is how you end the holiday. You can't have a Fourth of July without fireworks, so if you're going to put a cool piece in your Independence Day collection, it has to be a fireworks card!

Panini Prizm has been putting out fireworks inserts for years, so there is a wide variety of players to choose from. Picking the top player of the game seems like the easiest route – Mike Trout!

The 2020 Fireworks insert Silver refractor has Trout in his swing, most likely crushing a homer, with the fireworks in the background. The refractor colors of green, gold, pink, blue, yellow, and every other eye-popping color is gorgeous. If you're going to snatch up a card for this weekend, you can own this Trout for only $20.

If you're going to miss baseball as much as we are on Independence Day, hopefully you can add some of these awesome July 4th –themed items to tide you over. Don't forget, not only do we BUY collections, we also have eBay stores for graded and ungraded cards. If there is a card or item you want in your collection, feel free to check out our stores, or simply give us a call at (732) 828-2261!