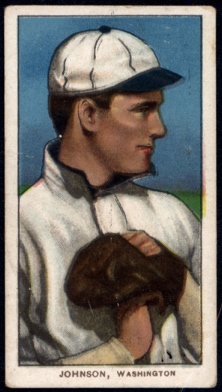 We received an email inquiry, not dissimilar to many others that we receive on a daily basis, about a collection that consisted of more than 150 tobacco cards that the owner would like to have appraised.  One of our dedicated customer service specialists promptly contacted the owner and discussed the collection and was able to gather details and get the owner to forward us images of the cards in the collection to help aid in preparing the evaluation.

Upon receiving the T206 images, one of our vintage card specialists began reviewing the photos, prepared an Excel spreadsheet and began evaluating the cards.  We provided a very conservative preliminary evaluation based solely upon the uncertainty of the condition of the cards pending removal from the album and valued them ranging from FR to GD.

The owner was hesitant to remove the cards from the album as they were adhering to the adhesive contact paper backing.  We've seen these "contact adhesive-style" albums in the past and the result of removing cards from them varies.  Sometimes, they release easily, sometimes they do not release at all.  Many times, upon coming out of the album, the adhesive leaves stains on the back of the cards.

Amazingly, we were able to process this collection from start to finish in a week -- and that's with traveling to a card convention for 4 days over the weekend -- a true testament to our process and to our specialists.  We were contacted on a Wednesday, provided a preliminary evaluation by Thursday and arranged to meet and pick up with the owner to review the collection on Monday.

After picking up the collection and receiving permission to remove the cards from the album, we were able to provide a full evaluation based upon the condition of each and every card with conditions ranging from PR to EX.  We presented the full evaluation to the owner with our purchase offer with was much, much more than we previously presented (but we anticipated this once we were able to view the collecting in-hand).  The owner asked for some time to review the offer with the family and we eventually agreed to a price and purchased the collection -- less than a week after the initial contact!

The T206 Set boasts a bevy of Hall of Fame players and is best known for two of the most difficult prewar baseball cards (Honus Wagner and Eddie Plank) and this collection was not a disappointment.  While there were no Ty Cobb or Cy Young cards, there was still plenty of star power.  While there were no duplicate in the collection, the T206 set does have many players in various poses (or different teams if they were traded during the several years the set was issued).  Several of the Hall of Famers were found in multiple poses within the collection.

Christy Mathewson was featured in his Portrait version while Tris Speaker appeared in the singular pose that he has in the set.  Part of the Chicago Cubs legendary Hall of Fame double-play combination of Tinkers-to-Evers-to-Chance, Frank Chance appears in the collection on his Yellow Background Portrait pose.

"Wee" Willie Keeler appeared on both his Portrait and his Batting posed while Mordecai Brown appeared throwing in both Chicago and Cubs jerseys while Fred Clarke could be found with his stoic Portrait as well as his Batting release.  Walter "The Big Train" Johnson was depicted in both his Pitching and Portrait cards.

While the previously listed Hall of Famers would make for a pretty exciting haul, they were just an appetizer.  The list of other Hall of Famers included in this collection continued with Frank "Homerun" Baker, Zack Wheat, Frank Duffy, Jack Chesbro, Sam Crawford, Miller Higgins, Clark Griffith, Miller Huggins, Ed Walsh, George Davis and Roger Bresnahan. And there was plenty of additional star power as well the Black Sox scandal's Ed Cicotte.

Surprisingly, given the fact that there were 177 different cards, there was only one of the tough variations which was Carl Lundgren - Chicago.  176 of the 177 cards boasted advertising backs from Piedmont and Sweet Caporal with the solitary exception being an American Beauty back featuring Cecil Ferguson.

We set up at The National Sports Collectors Convention every year and this year, it will be at the Stephens Convention Center in the Rosemont section of Chicago, IL and it has also been in Cleveland, Atlantic City and Baltimore in recent years. Additionally, we travel to the Sports Card and Memorabilia Expo in Mississauga, Ontario for those of you in the Toronto area that want to meet with us in Canada.