That's right, this collector paid less than a dollar for his T206 Cobb! 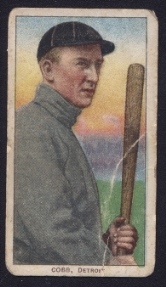 When you buy and sell sports cards and meet with hundreds of people and speak with thousands, you're bound to hear a wide range of stories about collections.  We've learned how many collections were assembled from buying packs, trading or going to card shows, passed down through the family or found while cleaning and organizing.  Sometimes, there are facets that we still find amazing and these are the nuggets that we really get a kick out of and love sharing with our readers and our customers.

A collection that we recently purchased had some great history behind it.  The cornerstone of the collection was a 1909-11 T206 Ty Cobb Bat Off of Shoulder pose that he purchased via mail order for less than a dollar!  Yes, he paid less than a dollar shortly after he began collecting in the late 1960s.  In fact, when he bought the card, he could've bought a mere 15 packs of current day cards or send away for the Cobb.  He was wise beyond his years in selecting the send-away option.  A card that he paid less than a dollar for is now hundreds and hundreds of dollars -- something he found out when he contacted us for a free appraisal.

He also added some nice Hall of Famers along the way, including Sandy Koufax, Roberto Clemente, Hank Aaron, Willie Mays and Mickey Mantle.

But the story isn't just about the Ty Cobb baseball card.  The story is about what prompted the collector to begin his collection and how he accumulated it over the years with some interesting anecdotes along the way.

Sometimes, we retell the story, but in this case, maybe the collector's own words will really set the mood for the collection and how he assembled it:

I started collecting baseball cards in 1967 when a friend gave me one of his Tito Fuentes cards. (The 1967 Topps is still my favorite card. Maybe because it was my first, but I also love the clean design, great photography and autograph.) From that first card, I got hooked and collected avidly for about 5 years, then put my cards away in a box as I moved on to other interests.

Shortly after I started collecting, I got a book about the original five players to be inducted into the Baseball Hall of Fame and decided to see if I could add those guys to my collection. I sent away for a catalog from a card company and when I got it I was amazed to see they had cards dating all the way back to 1910. I placed an order for two cards at first: a 1910 T206 Ty Cobb and a 1910 T206 Honus Wagner. Cost: 75 cents each. I made 35 cents a week in allowance, so it was a major investment. As luck would have it (my luck anyway), they were out of stock of the Honus Wagner but sent me the Cobb (otherwise I would've retired years ago).

That Ty Cobb cigarette card became the centerpiece of my collection, not for its monetary value but for its history. My collection was always close by, and the cards got handled frequently as I traded them with friends and memorized stats. My favorite players bore the brunt of my attention, so they are the ones in the worst shape today. They were the rabbits to my Lenny from Of Mice and Men. Willie Mays, Hank Aaron, Carl Yastrzemski, and others were manhandled but came through it all pretty well. Who knew they'd be worth money someday?

Another standout card in my collection is the 1968 Nolan Ryan rookie card. It was just another one of the five cards in the pack with the bubble gum that I bought myself, and since Ryan and his cardmate Jerry Koosman were unknown to me then, and I didn't care much for the "shared" style of card, it was relegated to the bottom of the deck. Which turned out great in the long run, because it rarely got handled and remained in excellent condition.

After I'd been collecting for a couple of years, a friend gave me a stack of cards that he inherited from an older brother or cousin. He wasn't into them so he just gave them to me. They were all from the 1950s and early '60s and included a 1957 Ted Williams, a '58 Bob Clemente, a '58 Sandy Koufax, a '58 Whitey Ford, a '61 Yogi Berra, a '62 Hank Aaron, and a '64 Willie Mays. Unfortunately, some of the other cards in the stack hadn't fared too well under the older relative's ownership. It seems that when a player was traded, the guy would cross out the team name on the card — in ink — and write in the new team on the front of the card in a child-like scrawl.

I ended up with over a thousand cards in my collection, including some football and basketball cards. I hope their new owners enjoy them as much as I have.

We're pretty sure that the new owners will enjoy them, too.  In fact, we hope that they enjoy them as much as the collector that sold them to us did.  This hobby is about the fun and the excitement and the enjoyment that these tiny cardboard treasures brings all of us.  Stories like this help remind us of why so many really enjoy the hobby. If you have a collection, we'd love to hear from you, too!

Just Collect is always buying vintage sports and non-sports cards from 1879 to 1979 as well as select modern cards. If you have a collection that you are considering selling, contact us today to discuss or get our industry leading purchase offer. If you have a collection that you want appraised, please contact and we would be happy to discuss your collection and help you understand the value in the current marketplace.