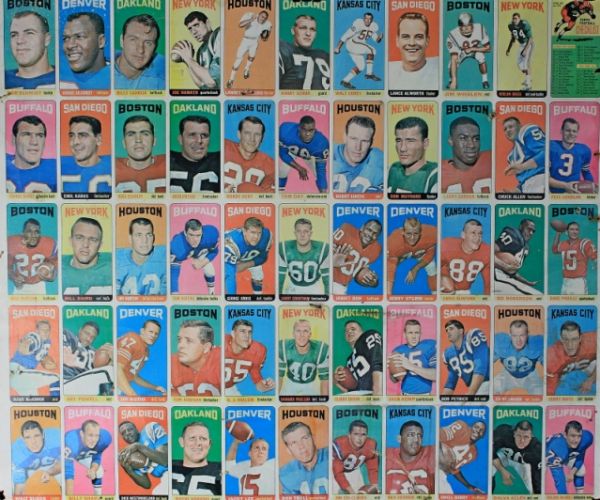 Let's Talk About a Set

We've shared several cards and sets from this collection with you in the past and we've provided a video below of this set. But we're also going to elaborate more about the 1965 Topps Football Set more than the collection that we purchased it with.

Due to its large format size and eye-catching colors, the 1965 Topps set is one of the most popular vintage football releases and much of that can be attributed to the Joe Namath rookie card. Measuring in at 2 ½" x 4 11/16" and affectionately referred to as "Tall Boys," general wear has always been an issue with these cards as have been problems with centering and tilt. Namath cards have fallen prey to these detriments and imperfections over the years and combined with a desire for even causal fans to want to add a card of "Broadway Joe" to their collection, and you can begin to understand why there has been a somewhat regular increase in the valuation of his cards and why top condition cards are setting records whenever they come to market.

Joe Namath's Super Bowl III guarantee cemented his place as a true sports legend and earned him a loyal group of adoring fans. A dedicated core of fans that continue to clamor for autographs on jerseys, balls, programs and vintage photos.  If it can be traced back to "Joe Willie," then be prepared to pay a premium. Namath football cards are no exception and seem to be the hottest segment of the Namath market right now. Namath's 1965 Topps #122 rookie card, graded PSA 9, set a new record when it sold privately for what was considered an unreal $60,000 in 2015. But, that record didn't last too long as a public sale on February 28, 2018 via Heritage Auction that closed for an eye-popping $264,000.00! Yes, that's more than a quarter of a million dollars!!!

It's also worth mentioning that there is a "butterfly" variation of this card, which is perceived to be scarcer than the "non-butterfly" version. Also known as the "tattoo" version, the inconsistency is an ink spot that appears on Namath's left hand in the shape of a butterfly. PSA does not currently recognize this as a variation and it does not carry much of a premium over the regular rookie card -- despite some seller's claims to the contrary.

But There's More Tall Boys in the Set

Former condidate for President Jack Kemp was a long-tossing quarterback with the Buffalo Bills in the old AFL before becoming a U.S. House of Representatives from the State of New York and regular primary contender. Fred Williamson, a defensive back with the Oakland Raiders before becoming a reknowned film and television actor after retiring from football.

Just Collect travels to several shows on a regular basis. In the New York area, we often attend the White Plains Show at the Westchester County Center in White Plains, NY. If you're in the New England area, you can make an appointment to meet with one of our specialists when we're in the area for the Shriner's Show at the Allepo Auditorium in Wilmington, MA. We also visit the Metro-DC area when we attend the CSA Show in Chantilly, VA. If you're in the South Jersey or Deleware area, you can also schedule appointments while we're in the Philadelphia area when we do The Philly Show in Valley Forge, PA.

We set up at The National every year and this year, it will be at the IX Center in Cleveland, OH and it has been in Chacgo, Atlantic City and Baltimore in recent years. Additionally, we travel to the Sports Card and Memorabilia Expo in Missisauga, Ontario for those of you in the Toronto area that want to meet with us in Canada.

We would love to meet with you and schedule a private appointment to assess and value your collection while we are in your area.

We discuss all of the selling options with everyone that we meet with. In most cases, selling the collection on their own will put the most money on the bottom line, but it will also take an large commitment of time and energy and one that most are not ready or able to undertake. Another misconception is that grading the collection will return more money. When I hear people say, "You're just going to grade them and get ten times the money," I almost cringe. Grading a collection can be a money losing proposition, especially if you don't know what you're doing. And most times, we grade very few, if any cards, from average colections that we buy.