The year 1957 would develop to be a year of firsts and lasts for baseball and baseball cards. For baseball, the first included the Milwaukee Braves winning the World Series in just their fifth season in their new home. The team was led by future Hall of Famers Hank Aaron, Eddie Mathews and Warren Spahn, and assisted by Lew Burdette's sensational pitching performance in the World Series. The 1957 season would also end up as the final season that there would be three teams located in New York City, as both of the National League franchises would move to the West Coast at the conclusion of that season.

For Topps, 1957 would also be the beginning of a new era as this would be the first set issued in what is now considered the standard-size of 2 1/2" by 3 1/2". In addition, many collectors believe the simple design made the 1957 set the most attractive, out of an great group of 1950's sets, of any of the 1950's set. The white-bordered cards are mostly covered by the player photo with their name, team and position on the bottom. The backs have biographical information, a brief informational blurb and year-by-year career statistics. There is also a cartoon on the back featuring a baseball quiz about historical facts.

The 1957 Topps set was issued in series of 88 cards for the first four series, and then the final series covers cards numbered 353-407. The first series is absolutely loaded with stars and superstars, and each of the next two series also has many stars and superstars of the day. The fourth series, which is considered the toughest series in this set, does not have any many of the star players of the day but does contain many of the most popular rookie cards while the final series shows how Topps was constantly updating their sets in those days. When one examines many of the players in the final series one can determine how many of those players were the younger unproven players of that time.

The first series, not only features many of the star players but also an error as Ed Fitzgerald is pictured on the Jerry Snyder card (#22). To show how some people never forget even 50 years later, when Topps sent a re-issue of that card for Snyder to autograph for insertion into packs, he not only signed the cards but also took the time to write "That's not me" on each and every one of those cards. Another fun error in the 1st series was that Hank Aaron is pictured as a left-handed batter. Since the error was never corrected, there is no extra value, except for the greatness of the player. This would be the second of three straight years that something either interesting on an error basis or a variant would appear on the Aaron card. Of course, the set's real keys are the stars and rookie cards. Another card which is very popular is the Ted Kluszewski card which shows his massive biceps in all their glory. As it was so unusual for players to not wear sleeves then or today, that card is reflective of a major star of the time.

The 1957 Topps set has an excellent rookie card class including several future Hall of Famers including Jim Bunning, Don Drysdale, Brooks Robinson, Frank Robinson. In addition, there are also rookie cards of players who gained popularity as both players and for their post-playing career, including Rocky Colavito, Tony Kubek, and Bobby Richardson. Joining these rookies are the usual superstars including Ted Williams as card #1 through the final card (#407) which featured Mickey Mantle and Yogi Berra. This would be the second and final time they would appear together on a card with the first being the 1953 Bowman Mantle, Berra and Hank Bauer card. 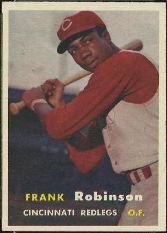 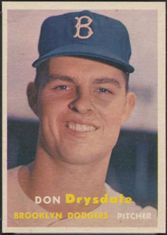 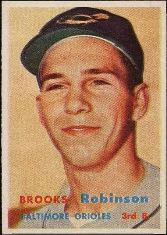 And as befits the smaller set, there is a great amount of these cards which exist in mint 9 (sans qualifiers) or gem mint 10 grades. The card with the most in grades 9 or 10 was the Tiger team card while there are many cards in the scarcer series of 265-352 which have had only one card graded mint and no cards graded gem mint. Even many of the stars have a slightly higher percentage of cards in the high grades. An example is Enos Slaughter who has 20 cards with the highly desires 9 or 10 grades in less than 700 total graded cards. That percentage shows what the future would start becoming for more and more cards in high grades, but those very scarce in high grade makes this a true challenge to collect in mint condition.

And as for Topps, the reaction to the smaller size must have been overwhelmingly popular among the children of the day as Topps would never return to the larger size cards for their regular issue.

Give us a call today to talk more about this set and your collection. We are always buying.