Bill James, in his book about the Hall of Fame, called 1956 the year of a generational switch. Many of the greats of the 1940's and early 1950's would play their final game that year including Bob Feller, Phil Rizzuto and Jackie Robinson. At the same time, future Hall of Famers such as Luis Aparicio, Brooks Robinson and Frank Robinson were just beginning their careers. And as tor Topps, the 1956 baseball set would also prove to be a set which would begin their transformation as the sole producer of major league baseball cards for a quarter century.

The 1956 Topps set, which turned out to be the final set issued in what is called "larger sized", also was the largest set Topps had issued since their legendary 1952 set. The horizontally oriented card fronts show a larger player portrait with an action shot purporting to be the same player in a smaller photos. While most of the time Topps did use the same player, there is a great error on the Hank Aaron card. The reason is, the player shown sliding in the background is really Willie Mays. By accident, Topps produced a card with two of the all-time leading home run hitters on the same card!

There is considerably more to the 1956 Topps set, as the backs feature seasonal and career statistics along with some informational cartoons. While Topps did not publicize who drew for them, many of the leading comic book artists of the 1950's were used by Topps to create those drawings. And another interesting fact, is that cards numbered 1-180 come in either white or gray backs. For the first series of cards numbered 1-100 the gray backs are slightly more difficult, but for the second series of cards numbered 101-180, the white backs are far more difficult. Even the lower numbered team cards come in several different fronts with their names centered or dated.

The 1956 set does continue with the third series of cards from 181 through 260, which are the slightly more difficult cards in the set, and cards numbered 261-340 complete this set.

However, as with any set, the real key is the player selection. While the rookie card crop is not quite as good as previous years, there are a couple of future Hall of Famers honored: Walt Alston (#8) and Luis Aparicio (#292). However, the most important card in this set, as he would basically be during the rest of his playing career, was the return to Mickey Mantle (#135) to the Topps family after missing the 1954 and 1955 release. The timing was great for Topps to have Mantle again as he would win the Major League Triple Crown in 1956 - hitting .353 with 53 homers and 130 runs batted in. 1956 truly was the magical season for Mantle, and his youthful appearance made the 1956 card one to have then and today. 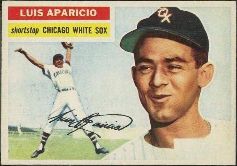 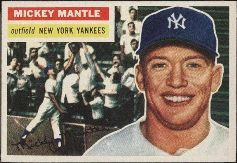 On a side note, there is a 1954 Sports Illustrated "Yankees" insert card picturing Mantle as a Yankee in the second issue. The second Sports Illustrated is far more difficult then the first issue. Typical of most 1950's cards very few of Mantle's cards are graded as mint 9 (without qualifiers) or gem mint 10. There have been more than 5,000 cards graded and less than 40 have those heavily desired high grades. Only other player, his Yankee teammate Joe Collins has more than 35 card graded in 9 or 10. Most of these 1956 cards, as with these other over-sized cards have proved to be truly difficult to obtain in mint condition.