Topps baseball set did not disappoint. The 1953 Topps set is laden with beautiful paintings drawn by many of the leading artists of the day and also features many of the games best players of the day and those whose stars would shine much brighter in the future.

The design of the set features absolutely gorgeous player portraits on most of the card with the player's name, position, team name and team logo on the bottom. The player information is in a colored bordered (either red or black) which bleeds into the corner making high-conditioned cards very difficult to obtain. The PSA Population Report has over 110,000 cards graded with less than 1,000 being honored with the Mint 9 (sans qualifiers) or Gem Mt 10 graded. This means that less than one percent of the cards that survived, and we even presume, most 1953's have not even survived the past six decades, are in what is called mint condition. At the time these cards were issued in five card packs which contained five cards. At a penny each, don't you wish you could be transported in time and scoop up some great conditioned 1953 Topps cards.

A perfect example of the condition scarcity is the very first card in the set, Jackie Robinson. There have been more than 1,500 card of him graded but less than 10 are graded mint or gem mint. And yes, that was a great debut for the player who may have been at the time, the most famous athlete of the time. Heck, by 1953 there had even been a movie made chronicling his life and career. Other key players in the set include Mickey Mantle (card #82), Satchel Paige (Card #220) and Willie Mays (Card #244). Mantle is also a beautiful facial portrait and many collectors actually prefer this card over the more famed 1952 Topps High Number (#311). Interestingly there have been even more Mantle cards graded then Jackie Robinson and again less than 10 copies are graded mint or better (without qualifiers) out of more than 2500 cards graded. The final key card before the high number series is #220 Satchel Paige, whose name is spelled incorrectly on the card front, His card is spelled with 2 L's. Again with more than 2.000 cards graded by PSA, there are less than 10 mint or better examples. Also interesting to note if you presume Topps may not have wanted to publish a high number series the first and last cards of the first few series are the most famous black players of the day. Topps began with Jackie and ended with Satchel. 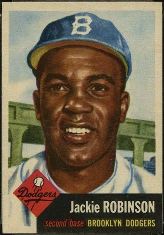 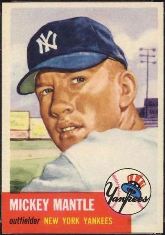 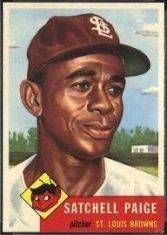 And our fourth key card is Willie Mays (#244), who is also part of the high number series which came out later in the year and are much more difficult then the series preceding those. Sure enough again there are less than 10 mint or better examples in more than 1,000 cards graded. The Mays card is an action portrait showing him fielding. In 1953 a fielding portrait was fine was Mays as he was already an exquisite fielder and his bat had not yet developed into what would come over the next decade.

As with all sets in the 1950's these cards were issued in series, with this set issued in the following series (1-85, 86-165, 166-220 and 221-280). The cards in series 166-220 are the most common of the 1953's and that has always been somewhat reflected in price guide values as those cards can be the most common in any grouping of 1953's.when new collections appear on the secondary market. And, of course, as with most 1950's and 1960's sets, the final series is the least produced and the least available. In fact, there were enough issues in the famed baseball card war of that time, that six cards in the last series were never produced. And although it is believed to be known who they were supposed to be by the files which have since surfaced, wasn't that a great marketing tool to have missing cards. Some mysteries may be better off left unsolved and those are among them.

Some other quirks in this set involve some short and double printed early series cards. Some of the better players who were short printed include Joe Black, Smoky Burgess and Early Wynn. Those short prints are much tougher then the rest of the low series cards to acquire. And of course, while there are no future Hall of Fame rookie cards there were several nice rookie cards in the final series including Roy Face, Jim "Junior" Gilliam and Johnny Podres. All of these cards are also in the high numbered series.

With the colored borders, difficult to find cards, and the great player selection, there is little wonder why 1953 Topps has always been a favorite among collectors