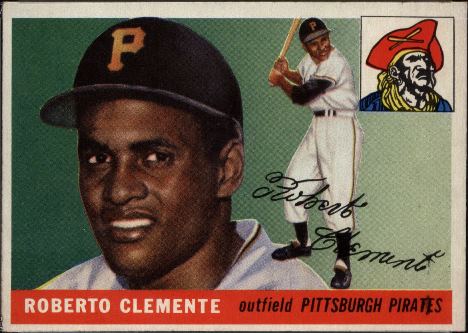 With the exception of seeing the man himself, who was an Olympic-caliber athlete with a laser-like arm, watching a 1955 Topps #164 Roberto Clemente rookie card come up for auction has become the most exciting event, hands down, in the hobby today. Ever since the hammer dropped at an eye-popping $432,690 on the one and only PSA 10 specimen four years ago, demand and prices for vintage Clemente cards have sky-rocketed and the bidding wars to own a high-grade example have been epic!

Take a moment to consider some of these figures. Before you do though you may want to take a seat. Numbers like these have been known to cause shortness of breath and dizziness. All joking aside though, let's start with the market for Topps Clemente rookie examples graded PSA 8. In 2010 cards of such quality could be had for $5K. Seven years later, specimens of similar pedigree are now fetching $30-40K or more!

Three years ago, the going price for a Clemente PSA 7 was around $4,500. This past year, prices have creeped into the $8,000 threshold, nearly doubling.

And what of the King? The Earth Shaker? The lone PSA 10 that put collectors back on their heels? Its reign as record holder ended as well. Replaced not by a newly found Gem Mint specimen but by one of the eleven, yes eleven, PSA 9's known to exist. It sold for $478,000 this past February. Wow! Just WOW!

Imagine if that "10" resurfaces? Breaking the seven figure mark wouldn't be a question. It'd be by how much! $1.25M? $1.5M? $2M?! Crazy talk? Maybe. But given the fact that there's only one "perfect" example of the 1955 Topps #164, that lofty number is certainly within the realm of possibility if the conditions are right.

What Is The Roberto Clemente Rookie Card Worth?

Here are some recent sales:

These are the type of numbers that would make even the most seasoned investor question the diversity of their portfolio. And it needn't be said that these exponential jumps were taking place in the aftermath of one of the greatest economic downturns in our country's history. Anyone holding a Clemente RC should be giddy at this point in time now that the worst seems to be behind us!

But let's all step back here for a second, catch our breaths, and take a closer look at the card causing this hysteria and the Hall of Famer who inspired it. First and foremost, the 1955 Topps issue is among the most beautifully crafted and thoughtfully designed set of cards to ever be created. Each front a tiny masterpiece showcasing the featured player's oversized hand tinted portrait alongside an equally striking, though smaller, full length shot (which in this case has captured Roberto with his bat cocked at the ready). The contrasting background allows both images to pop while the colorful logo at top right and rectangular red field holding the player's name, position, and team at bottom compliment perfectly. All are held within crisp white borders. Borders though, which all too often are found glaringly off center as anyone familiar with the '55 series knows all too frustratingly well. That unfortunate manufacturing flaw, along with print marks/lines, has been the major issue that has kept many of the cards submitted from procuring premium grades. Such are the challenges to high-caliber Clemente collectors, but after all of it was easy, everyone would be doing it, right? It's certainly a hard road though still a far cry from the one walked by this story's hero.

Son of a foreman and a laundress , Roberto was born in Carolina, a poor farming town in Puerto Rico. Discovered almost purely by accident on the mud covered lots that doubled as baseball diamonds to the local boys by a rice salesman and part-time scout at the age of fourteen, he was brought up slowly through the ranks of the PR leagues eventually reaching its summit when he joined the Santurce Congrejeros four years later. There he found mentors in the likes of former Negro League stars Bob Thurman and Willard Brown, competed with other MLB stars Hank Aaron and Willie Mays during winter ball, and caught the eye of more than one pro scout.

Signed by the Brooklyn Dodgers in 1954 and poorly stashed away in Montreal, he was plucked by the Pirates in the subsequent draft and found himself in a crowded outfield with questions still surrounding his decisions at the plate. A holdout by fellow outfielder, Frank Thomas, along with him being struck by an early season illness opened the window of opportunity for the youngster. One that he would keep open thanks to his legendary arm.

While he didn't start the first three games of the regular season, by the fourth Roberto was in the starting line-up holding his own, and it wasn't long before he became a fixture in the young Pittsburgh line-up. Like the rest of the team he struggled that year but showed promise to go along with some flat out flashes of greatness that set him apart from the rest of the team's core. His rifle throws and speed around the bags electrified and gave hope to the Bucs front office and faithful. All they'd need now was a little patience...just about five years worth.

1960 would see Clemente lead the Pirates to the first of two World Championships under his watch. While the next wouldn't come until '71, the wirey outfielder filled that time between rings with four batting titles, twelve consecutive Gold Gloves, the 1966 NL MVP Award, and the bulk of his 3,000 hits.

While those stats would be more than enough resume fodder to earn him entrance to the Hall, it was his work outside the lines that truly defined him. For he was as charitable as he was talented. A man proud of his Puerto Rican heritage who gave endlessly to those less fortunate back home and abroad until his very last day. It was that combination of humanitarian and super human abilities that today make all things Clemente so highly sought after.

Which brings us back to the beginning, the current run on his 1955 Topps #164 RC. Well, if you've read this far you probably fall into two categories, you either have one or you don't. Those fortunate enough to be among the former can either continue to enjoy the ride or cash in while the market is hot. While those out there who are still looking to add a Roberto rookie to their collection via auction or private sale should found their attention on those cards in the PSA 6 and PSA 7 range. They're still may be a chance to get in on one with some serious upside if you're able to get the right deal. Otherwise, the attics, markets, estate sales of the world await. New discoveries and incredible finds are still being made. All it takes is hard work and a little bit of luck which we wish you all the best!

Until then, anyone with questions concerning the purchase or sale of any vintage cards should can call today to speak with our team of experts. Their knowledge of the industry and passion for the hobby is unmatched. They're here to help and ready to make you an offer, having spent $20 million to date on sports and non-sports cards alike.