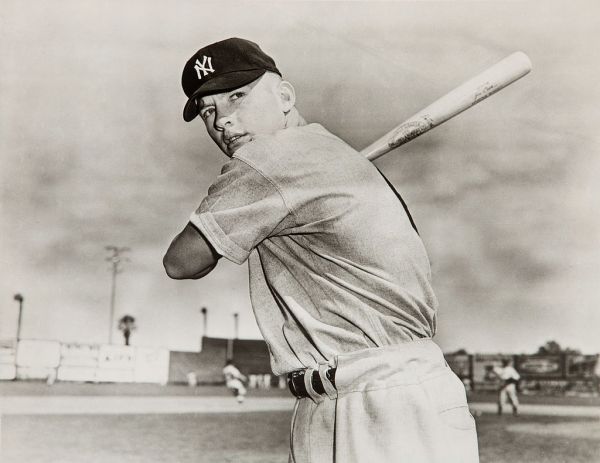 Mickey Mantle was born on October 20, 1931 in Spavinaw, Oklahoma and was named after Hall of Fame catcher Mickey Cochrane. Years later, Mickey joked that he was happy that his father only knew Cochrane's nickname as he might've ended up being named Gordon has his father known Cochrane's true first name.

The Mantle family moved to Commerce, Oklahoma when Mickey was four. Mickey grew up a fan of the St. Louis Cardinals and was an all-around star athlete at Commerce High School. He excelled in basketball and football (he was offered a scholarship by the Oklahoma Sooners) as well as baseball.

Mickey was spotted in 1948 by New York Yankees scout Tom Greenwade while playing for the semi-professional Baxter Springs Whiz Kids.  Greenwade was actually there to scout Mantle's Baxter Springs teammate Billy Johnson, but during the game, Mantle belted 3 homeruns.  Mantle, who had just finished his junior year in high school, was not eligible to be signed, but Greenwade returned the following year and in 1949, after completing his high school education, signed with the New York Yankees -- agreeing to a minor league contract that paid him $140 per month and included a $1,500.00 signing bonus.

Casey Stengel and the Yankees invited Mickey to instructional camp before the 1951 season.  After a very impressive spring training, Stengel opted to promote Mantle to the majors and played him in right field.  In anticipation of being the next in a line of Yankees stars, Stengel assigned Mantle uniform #6 to follow Ruth (#3), Gehrig (#4) and DiMaggio (#5).  However, after a slow start, he was demoted to Kansas City.  He eventually regained his confidence stroke and returned to the majors, but this time, he was assigned a new uniform number.  It was the number that would become synonymous with the Mick.  He wore the #7.

In 1952, DiMaggio retired and Mantle was moved to center field where he was selected to the All-Star team for the first time.  In the World Series that year, Mantle was the hitting star, knocking in the winning runs of a 4-2 World Series clinching Game 7 victory.

Mantle would go on to star in the World Series, establishing a still unsurpassed record of 18 World Series homers while leading the Yankees to 7 World Series titles.

Mickey reported to spring training in 1969, but realized that he would be unable to play and announced his retirement on March 1, 1969.  His career was recognized by the Yankees on "Mickey Mantle Day" at Yankee Stadium on June 8, 1969. 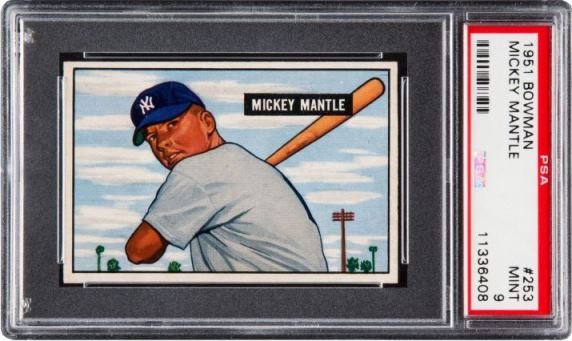 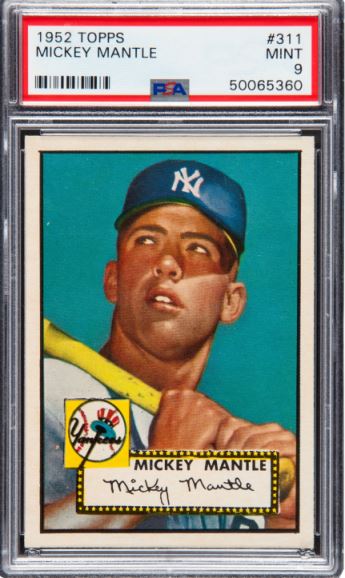 One of the great things about baseball is that it leads to a lot of discussion and debate. Who was the best hitter? Who was the best pitcher? Debate and comparison have remained a constant.

One debate that still comes about is which card is Mickey's rookie card? We can all agree that his 1951 #253 Bowman is his first card, but there is debate about whether his 1952 #311 Topps card should also be considered his rookie card. They are both great cards and whether someone wants to call the 1952 Topps card a rookie or not, does it really matter? It is his first Topps card, so one could say that it is actually his rookie Topps card?

Not all Mantle cards sell for the price of a mansion, but many are not cheap, either. Some of Mickey's most popular cards can be had for less than an average car payment as long as you're not looking at top condition. Although Mantle's cards remain pretty pricey through 1957, they start to become a bit more affordable as his career progressed.

A few of Mickey's most popular and most attractive cards are:

Mickey appeared on Topps cards during his playing career from 1952 through 1969 (Topps did not issue cards of Mantle in 1954 and 1955 due to contractual issues) and appeared on Bowman cards from 1951 through 1955, when Bowman ceased production and sold out to Topps). During his playing career, Mantle appeared on almost 100 different Topps cards. He had a base card for each season (except 1954 and 1955) and also appeared on numerous League Leader, Multiple Player, All-Star, Highlight and World Series cards.

While his base cards tend to sell for hundreds of dollars, many of his secondary cards can be had for a very reasonable price. Some of our favorites of these lesser value Mantle cards are:

Mickey's signature changed drastically from his early days and many people that are familiar with his signatures from the 1960's until his passing may not recognize his autograph from before 1960. 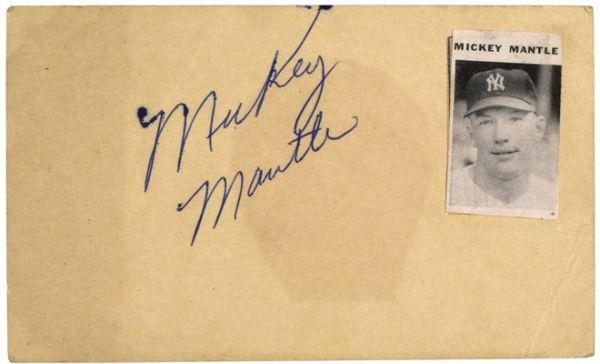 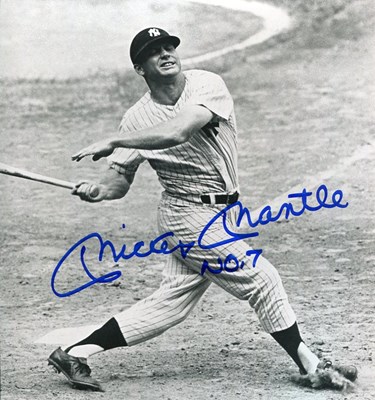 On April 17, 1953, while facing lefty Chuck Stobbs at Griffith Stadium in Washington, DC, Mantle, batting right-handed, slugged a homer that was measured by Yankees traveling secretary Red Patterson to have traveled 565 feet. Even subtracting for bounces and rolling, there is little question that the ball initially landed over 500 feet from home plate.

Late in the 1960 season, on September 10th, Mickey was batting left-handed and hit a ball that cleared the right field roof at Tiger Stadium in Detroit. Baseball historian Mark Gallagher, based upon where the ball was found, estimated that the ball traveled a total distance of 643 feet.

In Yankee Stadium on May 22, 1963, batting left-handed against Kansas City's Bill Fischer, Mantle hit a ball that many claimed was still rising when it smashed into the 110-foot high façade in right field and then caromed back onto the playing field. Estimates suggested that the ball would have traveled over 500 feet had it not been blocked by the façade during the ascent. 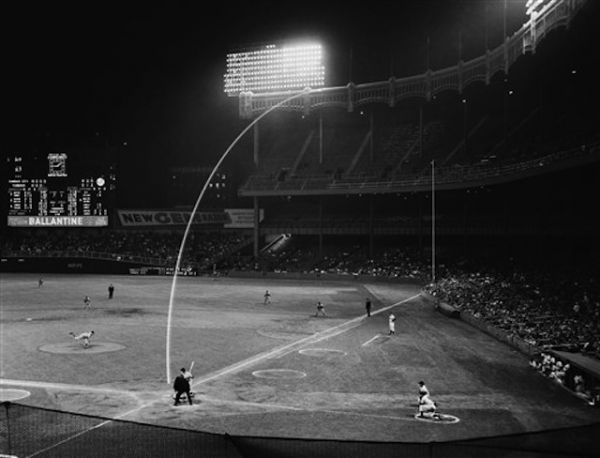 Another prodigious homerun occurred on August 12, 1964, when Mickey hit a ball that was undisputable. The homerun was a deep drive to center field drive that cleared the wall, the 22-foot batter's eye and landed about 75 feet beyond the 461-foot marker at the Stadium – a shot that many estimate exceeded 525 feet in the air.

There were at least three other times that Mantle hit balls off the upper-most right field facade at Yankee Stadium. To date, no player has hit a fair baseball out of the Yankee Stadium during a game.

Mickey played 18 seasons in the Major Leagues. A few of his career highlights:

Most collectors are well aware of the standard issues of Mickey Mantle manufactured by Topps and Bowman, but there are many regional and promotional issues that are quite elusive and highly sought after that feature Mickey during his playing days. Whether it was the inclusion in a local magazine, a card promoting pet food, potato chips or even soft drinks, if an advertiser could get him, they wanted Mickey to be part of their campaign.

Also, check out our free appraisal service. We'll tell you what your cards are worth, and what we'll pay for them.