As rookie cards go there are few finer, more desirable, or valuable than Mickey Mantle's 1951 Bowman #253. As actual rookie seasons go....well that's another story. Called up on September 17, 1950 for the sole purpose of giving the highly touted 18-year-old prospect a taste of the Bigs, Mick rode the bench for the few final days of the Yankees pennant race with their rival Red Sox and Detroit Tigers. And though he never stepped foot on the field for a game, he still considered traveling with the team and taking batting practice with the likes of Joe DiMaggio, Yogi Berra, and Phil Rizzuto as time very well spent. Their competitive nature and professionalism stoked Mick's own fire and prepared him for his official debut the following year. Or so he thought.

By the time Mantle arrived at spring training in 1951, the hype train had already left the station. Stories of his tape-measure home runs and break neck speed had management champing at the bit to declare him the next Pinstripe great. So certain that he was the heir apparent, that clubhouse manager Pete Sheehy assigned him uniform number 6. Yes, that's right, #6. As in Ruth (uniform number 3), Gehrig (4), DiMaggio (5), and now Mickey Mantle (6). Yankees PR man, Red Patterson went so far as to declare that was it "the law of mathematical progression," even though the digit and the expectations never sat well with the rookie himself.

The burden didn't seem to have much of an effect as Mantle exploded out of the gates during preseason continuing to smash towering home runs and flash his fast-becoming, signature speed. Things didn't slow down either once the regular season started as his hot streak carried right through April and May. All was going exactly according to plan in the eyes of his employers and possibly Mick's biggest critic, his father, Mutt Mantle, the former minor leaguer-turned-actual miner whose big league dreams for his son began the moment he was born and bestowed the name Mickey (after Mutt's favorite player, Mickey Cochran who's birth name, unbeknownst to Mutt was Gordon).

As soon as Mickey was big enough to hold a baseball the elder Mantle began schooling him on the finer points of the game he so loved and the long, exhausting hours under treacherous conditions at the mine did nothing to deter him from his fatherly duties.

Among those many lessons Mutt taught Mickey was the need to hone his skills as a switch-hitter. It was his belief that future managers would embrace a system in which right-handed hitters would face only lefty pitchers and vice-versa. An idea that may have been ahead of his time even by today's standards but gave Mick a clear advantage over his peers from the get-go.

Those countless backyard coaching sessions, led to years of dominating the local sandlots and youth leagues and by the time Mick was 15 he found himself part of the Baxter Springs Whiz Kids, a local team comprised of mine workers, former high-school stars, and even the occasional ex-minor leaguer. It was there that Mantle caught the eye of Tom Greenwade, a scout for the New York Yankees who had been gathering notes on Mantle's teammate, Billy Johnson. His focus shifted quickly to the 16 year-old shortstop though, who crushed a pair of home runs, one from each side of the plate. Both of which touched down in a creek far beyond the outfield fence.

Overly willing but inevitably unable to sign Mickey right there an then because of his age, Greenwood made good on his word that day and offered him a contract to play for the Yankees' Class D minor-league team in Independence, Kansas shortly after he graduated high school. Just like that, with an $1,100 signing bonus and a salary of $400 for the rest of the season, the Mantle boys were on their way towards the majors. Things went well during Mantle's first season in the Kansas-Oklahoma-Missorri (KOM) League, well enough that by September of the following year Mick was sharing a bench with Joe D and Yogi in the midst of a fiery playoff push. Which brings us back to where this flashback all began.

Down To The Minors

Following his sizzling start to the 1951 season, Mickey fell into a slump during June and July that prompted his manager, Casey Stengel, to send him back down to the minors where he felt the young phenom could work through his issues away from the bright lights of the city. Unfortunately, Mantle took the move more personally and his confidence was shaken to its core.

Three months earlier, he was being touted as DiMaggio's successor, the next king of New York. Now he was on his way to the Yankees' Triple-A affiliate in Kansas City where things were about to get worse. In his first eighteen plate appearances with his new team he mustered a mere three hits, one of them a bunt single. Not exactly what you'd expect from the next Big thing, especially against such inferior competition. No one was more shocked or disappointed than Mantle himself who began to believe that his dream and career was over before it ever had a chance to begin.

Needing support, Mickey reached out to Mutt but Papa Bear proved anything but a shoulder to cry on. Immediately after hearing that his son wanted to call it quits, he hung up the phone, got right in his car and drove directly from Commerce to Kansas City, where he confronted his son with some tough love. Some very, very, very tough love. Words like "whining", "coward", and "I thought I raised a man" were thrown around as Mutt tore through the Mickey's hotel room, all the while throwing his belongings in a bag. Rattled by his father's reaction, Mickey, eyes full of tears, promised his father he'd give it another try.

It was a promise he'd keep to the dismay of every pitcher he'd ever come to face. Forty games into his return to KC Mantle was batting .361 with 11 home runs and 60 RBIs, and the call back up to the majors came shortly after. Things would be different this time starting with a new uniform, number "6" was no more. It was Mickey Mantle, #7, from here on out.

Back On The Yankees

The final 27 games of the season saw Mantle hit .284 with six home runs and 20 RBIs on his way to helping the Yankees clinch the American League pennant. After a roller coaster of a year, Mantle's dream was back on track and the stage was set for a World Series showdown with crosstown New York Giants. Again, though that dream would be derailed. In the sixth inning of Game Two, Giants rookie Willie Mays hit a fly ball toward right-center field that set Mantle and DiMaggio on a crash course. Mantle, having been told to get after anything within his massive range in order to cover for the aging Dimaggio, sprinted toward the ball and for what appeared to be a head on collision with the future Hall of Famer. Fans held their breath as the gap between to two men shrank to almost nothing and with only a split second to spare DiMaggio called the rookie off, and just as Mantle began to pull up from a full sprint his spikes got caught on the cover of a drainpipe in the outfield and he crumbled to the ground. An eerie hush fell over the stadium and the stretcher was called out.

Mickey's rookie year would end in a hospital bed, his ACL torn, watching his teammates celebrate the franchise's latest title. It certainly wasn't the storybook ending he was hoping for but at his tender age he knew his time would come and soon after so did the rest of the world. His play over the course of eighteen seasons made him a first ballot hall of famer, a hero to a generation, and one of the most beloved Yankees of all time. It's no wonder then that his 1951 Bowman rookie card has become one the most prized possessions in the hobby today. 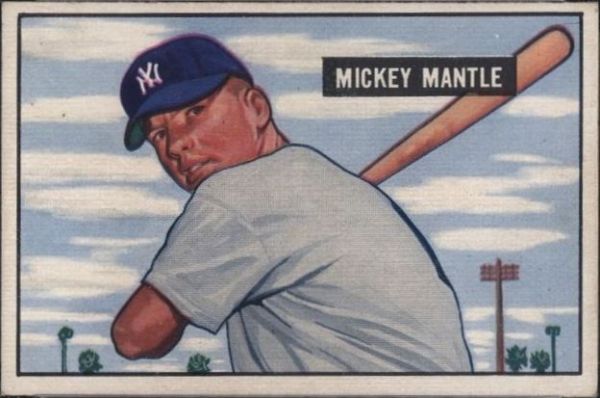 Issued a year before his Topps debut, Mickey's true rookie is visually stunning. The painted image on front shows the baby faced phenom with his bat raised against a cloudy backdrop, an image based on a black and white photo taken earlier that season. Every detail within in its commonly found off-centered borders oozes with the classic baseball feel that collectors go crazy for. A fact supported by recent auction prices that have established it as one fo the most expensive card in the hobby.. It's scarcity as a piece of the lesser printed high series is a major factor in those astronomical hammer prices as is condition. The true rookie cards in circulation are commonly found flawed by print lines and wax stains making high grade examples an extreme rarity commanding prices in the hundreds of thousands of dollars. In fact it wouldn't be surprising if one of the three examples graded PSA 10 broke the million dollar mark sometime in the near future...if they were to be offered for sale. It's likely though that won't be happening leaving the rest of us left to continue our hunt for vintage treasure elsewhere. So good luck to all of our fellow enthusiasts and as always please keep Just Collect in mind whenever you have a collecting related questions. Our in-house experts are available to field all vintage card inquiries and are ready to pay top dollar for your collection be it one 1951 Bowman Mantle or one million high-grade commons.

Call us today to set an appointment at any of our offices nationwide.