The T206 Eddie Plank might have been the hobby's most popular and most valuable card if not for Plank's T206 set-mate, Honus Wagner. But Plank, both the baseball player and the card, is every bit as worthy as Wagner. The Plank card is nearly as rare as Wagner's, and its story just as compelling and mysterious.

By all accounts, only 75 to 100 T206 Eddie Plank cards are known to exist. Like the more famous Honus Wagner card from the same set the scarcity is, and will likely always remain, a secret lost to history. A likely reason for the card's scarcity is that Plank was anti-tobacco and demanded that his image be removed from the cards used to promote cigarettes. Plank was one of his manager Connie Mack's favorite players because he lived clean, eschewing late nights, alcohol, and tobacco. Mack and Plank were known as two of the most outspoken anti-tobacco advocates in baseball, years before that became Wagner's calling card. Unlike Wagner who smoked cigars, Plank was never seen using tobacco products of any kind. 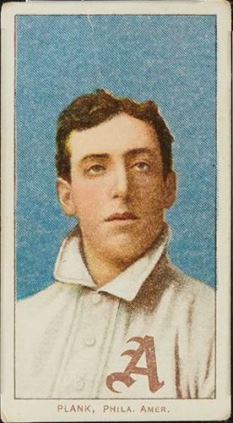 Another possibility is financial disagreement. In an era where baseball players rarely fought for additional pay, Plank left the Athletics in 1914 to play for the St. Louis Terriers of the rouge Federal League because, according to manager Connie Mack, Plank "was after the money." It is entirely possible that a debate over fair compensation like the one between Plank and the Philadelphia Athletics caused Plank's T206 cards to either be destroyed or not printed.

A broken printing plate is always a suspect, but is unlikely the culprit in this instance. The T206 set was printed over the course of three years (1909-1911), spread out over three different series. The Plank card appears in both the first and the second series, meaning that the Plank plate lasted at least through the entire first series – there should be far more than 75-100 cards remaining of a card which was printed throughout the entire first series.

A related, and more likely explanation is that the printing plate did not break, but was highly flawed. Under this theory, just as many Plank cards were created as any other card in the T206 series, but most of the Plank cards were unusable and were destroyed for reasons of quality control.

The Hobby's 2nd Most Valuable Card

The T206 Eddie Plank is not only the set's second most valuable card, but is arguably the hobby's second rarest and most valuable card behind the T206 Wagner. A EX/MT 6 Eddie Plank is worth around $250,000. An EX 5 is valued at $100,000, and a VG 3 is $70,000. Ken Kendrick, the owner of the Arizona Diamondbacks, recently loaned his card collection including an Eddie Plank card valued at $400,000 to the Baseball Hall of Fame for display. The most recent six-figure auction sale of the T206 Plank was ealier this year, where a PSA 5 example sold for $102,000 in Goldin Auctions.

In the summer of 2016, Just Collect received an email from a man named Kevin living outside of Boston which said, "I have had these cards for 25+ years and am not sure of value and unsure I want to part with them." "These cards" turned out to be a near complete set of T206 cards previously unknown to exist...including the Eddie Plank. The collection came to be known as The Fairy Godmother Collection, and received national media attention from Forbes magazine. You can see the full Fairy Godmother Collection on our blog: T206 Fairy Godmother Find.

Eddie Plank was the first left-handed pitcher elected to the Baseball Hall of Fame when he (and fellow southpaw Rube Waddell) was selected in 1946. He was the first lefty to win 300 games, and his 326 wins remain to this day the third most wins by a left-handed pitcher in baseball history. Plank was the ace on a Philadelphia Athletics team that went to the World Series 5 times during his 14 seasons with the team – he had a World Series Earned Run Average of 1.32. Teammate Eddie Collins summed up Plank's understated greatness: "Eddie was not the fastest. Not the trickiest, and not the possessor of the most stuff, but just the greatest."

... a Honus Wagner, Christy Mathewson, Cy Young, Ty Cobb, or any other cards from the T206 set, call Just Collect for a free appraisal. Just Collect is the Nation's top buyer of sports cards, and we're paying top dollar for vintage cards in any condition! Contact us today to speak with one of our specialists to find out what your card is worth, and to see what we're paying for it.