Before he was the Sultan of Swat, even before he was just the Babe, he was George Herman Ruth, a scrappy kid who spent his earliest years mostly unsupervised, free to relish in all the mischief the rough streets of Baltimore had to offer. Under the port city's grey skies, he roamed the docks, half-cocked on beers left behind at his father's saloon, filling the hours with an occasional petty crime and spitting tobacco. It's the type of humble beginning fit for any great Holllywood rags-to riches flick, but the legend of The Great Bambino had still yet to be written and the fact was times were extremely difficult for the entire Ruth family.

His father worked long hours at the family grocery/bar, and his mother was constantly in poor health. Neither was able to properly care for the boy and by the time that George Jr. was seven years-old, they had become entirely unable or unwilling to continue to try. They would soon have the future Hall of Famer declared "incorrigible" by the state and sent to live at St. Mary's Industrial School on the outskirts of the city. Over time there would be several reconciliations but after the final attempt in 1904, the courts assigned Ruth permanent residence at the facility until the day of his twenty-first birthday.

For many of the boys in Ruth's situation this would be the end, or at least the beginning of the end, of the story. Not for our hero though. Shortly after he arrived at St. Mary's, George found a friend, and father figure in Brother Matthias. A burly Canadian priest whose love of baseball made him a favorite among the boys. Under his watch Ruth would learn the three "R's" that would carry him for the rest of his days: reading, (w)riting, and ripping...home runs.

The pair spent the better part of the next decade together crafting George's obvious raw natural ability into an undeniable master skill set, one that easily stood out when he was finally permitted to take the field during amateur semi-pro games in the summer of 1913. Those steamy east-coast summer months saw Ruth sizzle on the mound as a top pitching prospect, and it wasn't long before Jack Dunn, owner of the minor league Baltimore Orioles club, came calling. Impressed with what he had seen, Dunn signed the phenom to his first contract, and by spring Ruth would find himself outside of the Baltimore city limits for the first time in his life.

Unfamiliar and seemingly out of place in the rustic surroundings of South Carolina, Ruth found comfort inside the ballpark where he continued to dominate even the improved level of competition. Two exhibition games against the major league Phillies saw him face twenty-nine batters and concede only two earned runs on six hits. The following week he recorded a complete game victory over the world champion Philadelphia Athletics! Despite this run of success, Ruth was with the club just a few more weeks (barely long enough to pick up a new nickname from his teammates) as Dunn, short on cash, sold his rights to the Boston Red Sox that summer.

On July 11, 1914, less than five months after leaving St. Mary's, the newly minted "Babe" made his debut at Fenway Park. While unspectacular, that first outing as a pro was solid as he recorded a seven-inning, 4-3 victory over visiting Cleveland. Unfortunately, it would be one of the few high points of the year as well. After getting hit hard in his next start, he was benched and then demoted to Boston's minor league affiliate in Providence, where he led the Grays to an International League pennant. Some argue that Ruth would have been brought back sooner had he not helped keep the seats filled in Rhode Island but either way he was back in the Bigs by October and closed the season with a complete game victory over his future employers, the New York Yankees.

The next season saw Babe Ruth officially become a major leaguer, as he stuck with the Boston squad from start to finish, and while it's difficult to say that he matured, his game definitely started to blossom. Too many late nights drinking followed by just as many hungover afternoons (in addition to a broken toe picked up kicking a bench after being intentionally walked) caused him to slump early on but once healed, and learned to better handle his liquor, Ruth returned to win thirteen of fourteen games between July and September.

Within the city of Boston there most certainly was buzz about the promising pitcher, but outside of the New England area the soon-to-be poster boy of the Roaring 1920's was still unrecognizable to most casual baseball fans. As such, Ruth didn't make a single appearance on any of the tobacco cards of the day throughout his official rookie campaign.

That would all change in 1916 though, as the baseball world, including Chicago-based printer Felix Mendelhsohn, stood up and took notice of the flame-throwing left-hander. They watched with amazement as he posted a league leading 1.75 ERA and notched an astonishing twenty-three wins. All capped off by a fourteen inning complete game over the Brooklyn Dodgers in the World Series (Boston would go on to win the series 4-1).

Even though the legendary homeruns and headline grabbing off-the-field exploits were still a few years away, there was no denying that Babe's star was on the rise and his humble beginnings in Baltimore were on their way to becoming part of folklore.

For collectors out there anxious to get their hands on a piece of Ruth-related memorabilia from those earliest years, the options a very few and very far between. Game used pieces are near extinct and astronomical in price when found, pre-Yankees autographs rarely come to market, and there are but a handful of original quality photos in circulation, which leaves us with his unofficial and official "rookie" cards. Extremely rare in their own right, several rookie cards have surfaced in recent years and, when offered at auction, have set record prices. If you are fortunate enough to have either of the cards below, or any Babe Ruth material from this era, then we'd love to hear from you today. Our team of experts is available to field any and all of your questions - and appointments can be made at any of the Just Collect offices nationwide. Visits can also be arranged for collections to large or valuable to ship.

Babe Ruth's true rookie card was produced in two colors, red and blue, and captured the young pitching in a full length pose in front and a team schedule on the reverse. It measures 2 5/8" x 3 5/8" and has yet to be found (only 3 have been recorded by PSA and fewer than 10 are known to exist) in a gradable condition higher than VG-EX. Some hobbyists argue that since the Orioles were part of the International League, a minor league organization at the time the card was released, that this shouldn't qualify as his actual "rookie" card but one thing for certain, finding one of these in any condition would mark the discovery of a lifetime! 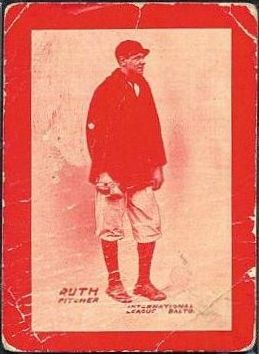 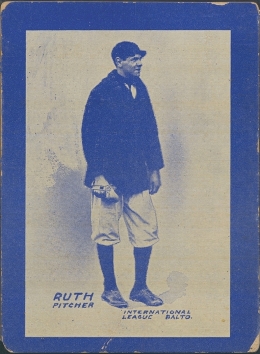 Presenting Babe in a Major League uniform for the first time as a member of the Boston Red Sox, the 1916 M101-4/M101-5 Sporting News #151 represents Ruth's official "rookie" card. The hook here being that The Sporting News was just one of eighteen different businesses (others being: Block & Kuhl (1916), Burgess-Nash, Everybody, Famous & Barr, Gimbels (M101-5), Globe Clothing Store, Green-Joyce, Herpolsheimer's (M101-4), Holmes for Homes Bread, Indianapolis Brewing, Mall Theatre, Morehouse Baking, Sporting News & Blank, Sporting News, Standard Biscuit, and Successful Farming) that purchased these blank backed sheets produced by Chicago-based printer, Felix Mendelsohn, in order to stamp them with their own company info and distribute them for promotional purposes. In fact the majority in circulation still have their original blank backs with the remainder owning advertisements of varying rarity (something to keep in mind when tracking any card from this 200-piece set). Regardless of which Ruth you may be fortunate enough to encounter, the first thing one will notice on the 1 5/8" x3" pasteboard is the incredibly crisp black and white photo of the young flamethrower who was still a few seasons from finding fame as a slugger. Centering issues are the most commonly found but again, an example in any condition is considered a major score. 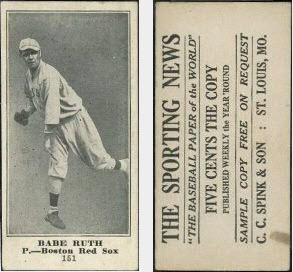